The Nipple Clamp of Doom

Look, I get it, the Image Nineties were all about the Age of Excess, with heads getting exploded and "dark" heroes and guns and pouches and basically every gimmick that could get a fifteen year old boy to swipe three bucks from his dad's wallet on the sly. But seriously, a cyborg zombie modern era Jonah Hex ripoff?* 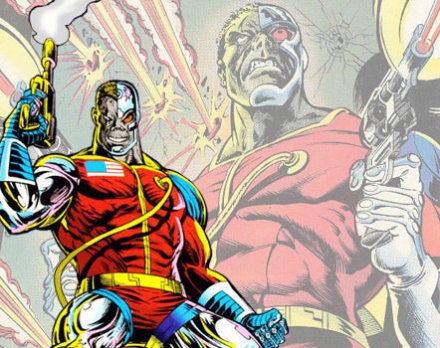 Given that your editor comes to you and says "Hey, Mr. Big Shot Artist Guy, howzabout taking a few minutes off from the jeans commercials and knocking me out a cyborg zombie modern era Jonah Hex ripoff", I understand that you've got to produce. I mean, hey, the Nineties aren't going to last forever and those thigh pouches don't fill themselves with ill-gotten loot, right?

But what in the name of all that's good and decent would lead you to give any character a breast pump? Especially a male character?

Maybe that's what's going in the various pouches -- baby's gotta eat when undead Jonah Hex comes home, after all. Though given where that tube is leading after feasting off his engorged man nipples, I'm thinking it's not a pouch that's involved. And that's disgusting.

* I know nothing at all about Deathlok, and am riffing off just this one image, because making fun of super hero costumes is what I do. I am fully aware that he is not a zombie, but I'm pretty sure he's a cyborg of some sort and dead certain he's got at least a little Jonah Hex DNA coursing through the ink in his veins. Or something. I'm just here to make you laugh, folks, and if "engorged man nipples" doesn't do it, well then apparently you're a lot less immature than I am.

(Image and character ©Marvel Comics, may God have mercy on their souls.)

9 Responses to The Nipple Clamp of Doom