With Mark Shute's advice, I have refined the way Legwear is apportioned and, accordingly, have updated the Legwear-MaleSpandex set of items for HeroMachine 3. I've added roughly double the number from before, and you can see how I'm breaking them out here: 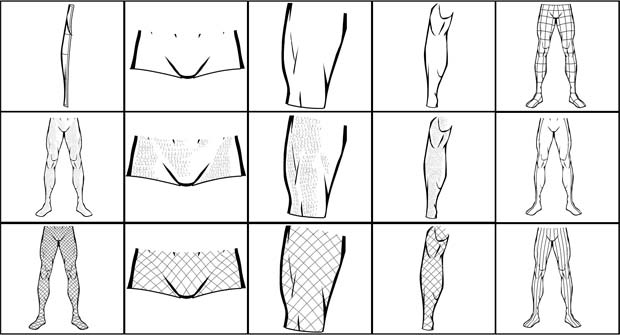 When I first did Spandex, I was on my high horse about the "right" way to use HeroMachine 3, using layers and masking and patterns with just a handful of the basic items to make pretty much whatever you want. Since then, I've moderated my thinking and understand that not everyone wants to work that hard, even the hard-core users who know how to do it the more advanced way. Also, the true vertical and horizontal patterns don't always look right when laid over the angled legs. So I ported over the most popular legwear patterns from HeroMachine 2, including the fishnet, the stars, and the hand-drawn chain mail.

Mark helped me set on a template for how to divide the leg up per the online discussion we all had, so hopefully it will be easier and more visually persuasive to manually position these pieces for alternate poses.

Due to the tapering of the bottom of the thigh, it's harder to make different length "shorts" with these spandex items than it will be when I give Pants the same treatment, but the idea is the same.

Anyway, hope you like this update. I'm now going to return to Pants to try and get those in line.