In honor of our contest theme this week, I give you an Image Nineties costume for the creatively-named Brick. See if you can tell which one he is in this cover: 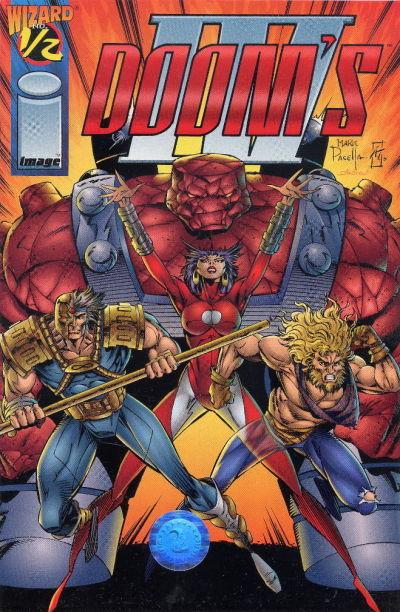 If you guessed the woman in the middle with the breasts hanging directly onto her collarbones and toothpicks for legs, you were wrong. Nor is he the Aquaman looking fellow with the sporty bandanna and perfectly round tear in his leotards.

No, Brick is the brick-colored figure in the background who has unfortunately had his entire abdomen ripped out and flung off-panel, jamming his stubby legs directly into his chest cavity. I chose this as a "bad costume", though, because of the way the big h-shaped harness studs mimic the studs on his shoulders and arms. Are those artificial studs, or thin metal coverings for bumps that actually exist on his body? I don't know about you, but I'd definitely rather he not take his clothes off to answer the question once and for all. Sometimes ignorance is bliss.

Also, I can't tell if his feet bend at the toes or not. Those might be column-feet that he staggers around on like a sawed-off satyr, but it's hard to tell. Given the treatment the other six feet on the cover receive, we may never know, but at least he didn't get the Bozo the Clown shoes Half-Skull-Man has to deal with. It's like Brick inherited the missing limb mass from the other three and just added it to his own in some kind of bizarre Image Universe Law of Conservation of Anatomy or something.

Being the intrepid reporter I am, however, I found another image that better shows his ... well, I guess "outfit" has to work, even though it's a stretch to call two twisted bits of metal that. Regardless: 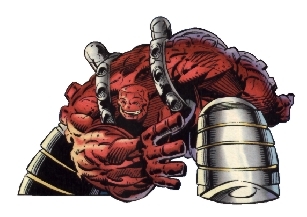 Here we can see that yes, his feet do have a toe portion, though they're largely subsumed by the giant tin cans mounting them like overly amorous R2 units. I'm still not sure why he needs studded metal suspenders if he doesn't have an abdomen, but maybe the public exposure laws where he's from are particularly aggressive.

My last word on this costume is to wonder why so many beefy brick guys wander around wearing metal armor, when metal walls and tanks and buildings are constantly getting torn up around them while their invulnerable skins stays perfectly intact. If they're tougher than metal, why wear metal? And if they're not, why are they bricks in the first place?

That's me, folks, constantly on the cutting edge of thinking about comic book physics from twenty years ago. You're welcome.