Character Contest 42: Another Brick in the Wall

Last time out we took aim at the classic comic book Martial Artists, and this week we're doing the same with that venerable archetype we modern-day types call a "Brick". 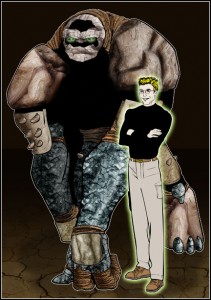 The Brick on the team is the heavy hitter, the punishment-absorber, the living shield, the person who takes and dishes out most of the physical damage on tap for that day. Classic examples would include The Thing, The Hulk, Colossus, Juggernaut, and The Blob. Typically these characters have enormous strength and stamina, often expressed as gigantic bulging muscles and powerful, stocky frames.

Sometimes, though, the team Brick might be deceptively normal looking, like Ultra Boy, Mon-El, Wonder Woman, or even Namor. Whatever the physical appearance, though, the Brick's job is to deal out physical damage while absorbing the same, and staying active as long as possible.

Bricks get up close and personal to do their fighting (with the exception of the always-classic thrown vehicle or chunk of pavement), so even though a character might be physically tough, they wouldn't qualify if they mainly used ranged powers or weapons in combat.

Of course you could take this out of the realm of super-heroes completely, instead choosing to design a classic armored knight/paladin, or a big tough soldier, or even a character from ancient Greek myths like Hercules.

207 Responses to Character Contest 42: Another Brick in the Wall