Your character design challenge this week is to put together the best illustration of that classic genre type called the "Martial Artist". The history of comics is replete with this kind of deadly serious, enormously skilled hand-to-hand specialist, from "Iron Fist" to the Legion's "Karate Kid". If you can design the best example of a super-hero Martial Artist using any HeroMachine version, you'll win either any item you like, or a portrait, to be included in the final HeroMachine 3 version. 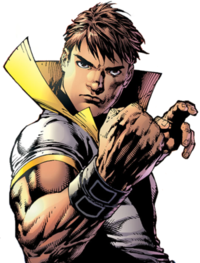 Martial Artists aren't usually bruising brawlers like Juggernaut. Characters like him and The Thing and The Hulk fight hand to hand mostly, but they're Bricks, built for dishing out and taking punishment. I'd even put Wolverine in the Brick category -- he's made to get the snot beaten out of him and still coming back to gut his enemy. The Beast, on the other hand, is definitely a Martial Artist, relying on his strength, yes, but more his agility and quickness and combat prowess to get through his melees.

Of course you could take this out of the realm of super-heroes completely, instead choosing to design a classic Ninja, or a Green Beret, or even a character from ancient Chinese myths.

Having said all that, the other rules are the same as always:

I've been pretty "specific" with the last few contests so I thought something a little more open-ended might be fun for a change, I hope you like the idea.

Finally, let me reiterate a plea to name your files in a sensible way, because it makes my life much easier when organizing these and thus, makes me like you better. For instance, I have a man crush in DiCicatriz because he does all of his files the right way.

Please name your files as [your name]-[character name].[file extension]. So DiCicatriz, for instance, would save his "Bayou Belle" character image as DiCicatriz-BayouBelle.png. He also has the grace to make his link go DIRECTLY to the file, instead of making me go to an ImageShack jump page, find the character, zoom in on the image, then save it. I can just right-click on the link in the comment, and choose "Save Target As ... " and presto, I've got his image, properly named, on my hard drive. Lovely.

See how I can just right-click on that and get the image? Or if you just regular-click it, you go directly to the image and ONLY the image? That's awesome.

Now here's a bad link (not to pick on Aaron, it's just the first one I came to):

Try regular-clicking that and you go to the PhotoBucket page, with all the surrounding crap it has on it. Try to right-click it and "Save Image As" and you get an html file instead of the image. So to get the image into the judging folder, I have to right-click, Open Link in New Tab, wait for PhotoBucket to load, click the image AGAIN to get it at full size, THEN right-click and Save As. It drives me nuts.

This isn't a rule or anything, but it sure puts me in a nice happy place to get one like DiCicatriz's and not like the other one. And that's a good thing when it comes judging time.