Having a bad costume foisted on you is demeaning enough, but a far sadder spectacle is a bad costume the recipient actually likes: 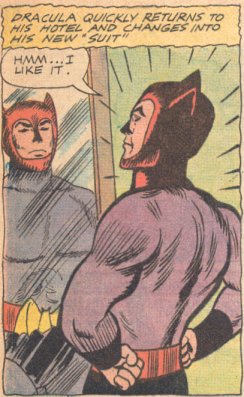 This revamp (get it, re-"vamp"?! I just slay myself!) is from the Golden Age of comics, when an intrepid publisher tried to cash in on the whole super-hero fad by combining spandex and Dracula. It must be frustrating to have all the supernatural power of the night and still no fashion sense, but he's really pulled it off here. From the Daredevil like horns and spandex mask to the gigantic bat buckle holding up his underwear, you'd think at least he'd be granted the mercy of not being able to see his own reflection in a mirror like a real vampire, but no. Even that is forbidden him, and he is forced to endure his own sartorial horror for all eternity.

Now that's a curse you can believe in.

Update: As several commenters pointed out, this is actually from a Dell comic in the 1960's. That's important because they had to make him non-scary due to the pernicious Comics Code. Remember kids, censorship leads to bad art, that's key.