Hammerknight has come up with what I think will be a very fun and interesting set of super-hero events which we're calling "Olympia Games" (ahem). He's put together an introductory poster describing what he has in mind (click to see it larger): 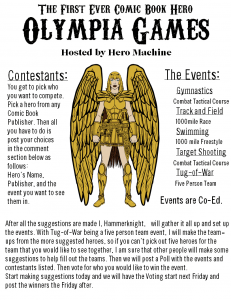 For those of you with problems getting to or viewing the poster, I'll try to retype the verbiage. And mega THANKS to Hammerknight both for the great idea, and for running it, he IS the man!

Contestants:
You get to pick who you want to compete. Pick a hero from any Comic Book Publisher. Then all you have to do is post your choices in the comment section below as follows: Hero's Name, Publisher, and the event you want to see them in.

After all the suggestions are made I, Hammerknight, will gather it all up and set up the events. With Tug-of-War being a five person team event, I will make the team-ups from the more suggested heroes, so if you can't pick out five heroes for the team that you would like to see together, I am sure that other people will make some suggestions to help fill out the teams. Then we will post a Poll with the events and contestants listed. Then vote for who you would like to win the event.

Start making suggestions today and we will have the Voting start next Friday and post the winners the Friday after.