The sole of the season

I have just published the FootRight-Female set of items to the HeroMachine 3 Alpha. I was hoping to translate them to the FootLeft, but frankly I ran out of time before I have to leave for vacation tomorrow. Oops. But, this way you can suggest new items or point out problems and I can fix them when I get back in just one set instead of both.

In the meantime, to get the shoe on the other foot (ha ha! See what I did there? GENIUS!), use the "Multiples" setting and the "Flip" function.

Here's one page of samples to whet your appetite: 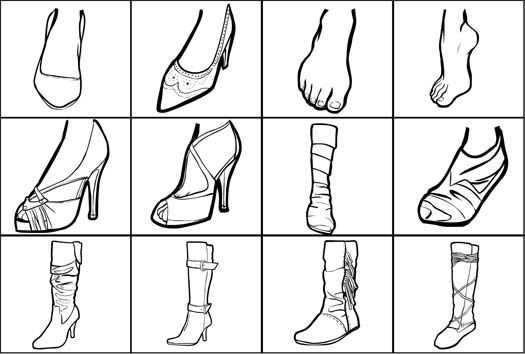 Note that I tried something different with this release, putting in feet in different "poses" as well as varying the angle of the foot in different items. I don't know if that's going to work or not, but my hope is that it will allow you more flexibility in designing the layout of the character.

As always, let me know what you think in the comments. Hope you like the new stuff!

14 Responses to The sole of the season