Congratulations to the winners of Friday Night Fights Round 2, who have each won either their own portrait or any item of their choice to be included in the final HeroMachine 3 version! The four Semi-Finalists will now square off in head-to-head matchups to compete for your votes. The two winners from this round go on to the Finals, with the runner-up receiving a custom black and white character illustration and the winner their own custom color illustration.

Here's how our bracket stands at the moment: 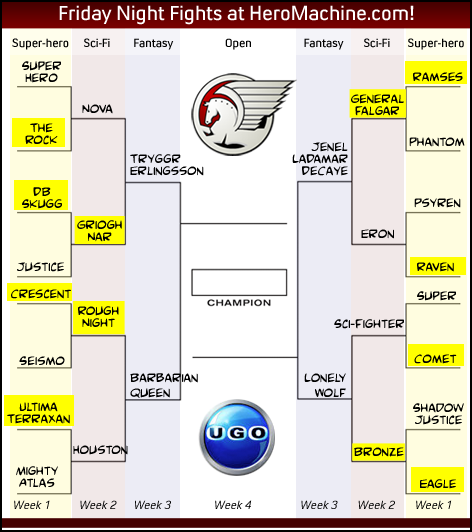 Without further ado, I present your two Semi-Final Matches (click on an image to see the full-sized version)!

Congratulations as well to the winner of the first West Coat Avengers bracket, "Flame Knight!" His creator will also receive their choice of a portrait or any item for HM3 inclusion. Like in the last round, we once again will have a "West Coast Avengers" bracket featuring all the Fantasy entries for those contestants not advancing on to the current main round, with the winner getting the same choice of portrait or item.

Voting is open from now until next Thursday night at midnight, and you can vote once per day. So tell your friends to vote early and vote often! Good luck to all four Semi-Finalists, and to the great folks in the WCA bracket.