The results are in for Round 1 of the first ever HeroMachine Friday Night Fights! Some of the races were razor-thin, with one contest being decided by a single vote. ONE VOTE, PEOPLE! Unlike national politics, your opinion really does matter here!

Congratulations to all those advancing to the next round, and hearty thanks to those brave souls who will not be pushing on. All is not lost for them, though -- see the bottom of the post for their ongoing efforts.

With the first set of head-to-head matchups complete, the victors now move on to their next challenge, as you can see in the Big Board below (winners highlighted in yellow): 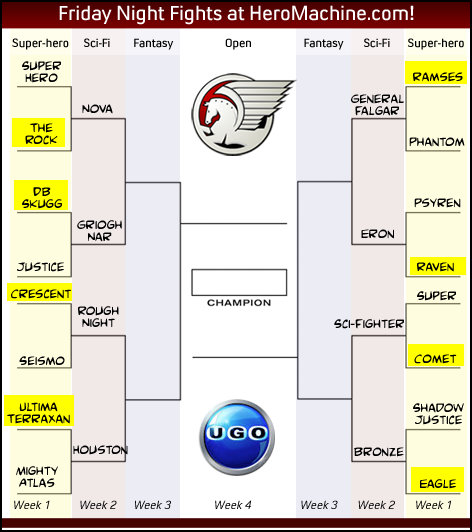 And now, on to Round Two! Remember, you can vote once per day, every day up until Thursday night at 11:59, so round up your friends and relatives, tell them to put the turkey down, and VOTE!

Finally, I struggled long and hard to figure out some way to ensure that the hard work and creativity of those who get eliminated are not completely lost, since everyone had to submit all four designs before the contest started. I have decided that each week there will be a "West Coast Avengers" group bracket comprised of all the themed entries for that week for all those who are eliminated from the main tournament. The winner of this consolation bracket each week will also receive their choice of either a portrait or any item they like for inclusion in the HeroMachine 3, so you still have a reason to vote.

From the high quality, you can see why I very much wanted everyone to be able to see these great creations.

Good luck to the eight warriors who continue on, and to one of these great eight designs as well!

42 Responses to Friday Night Fights Round 2!