In general, you don't want to associate yourself with a chicken when planning your super-adventuring career. I'm not saying chickens are bad animals, I'm just saying they're stupid, prone to killing themselves in spectacularly foolish ways, smelly, cowardly, and tasty when deep fried, none of which are attributes you particularly want to identify yourself with.

Unfortunately, no one gave Black Talon the memo: 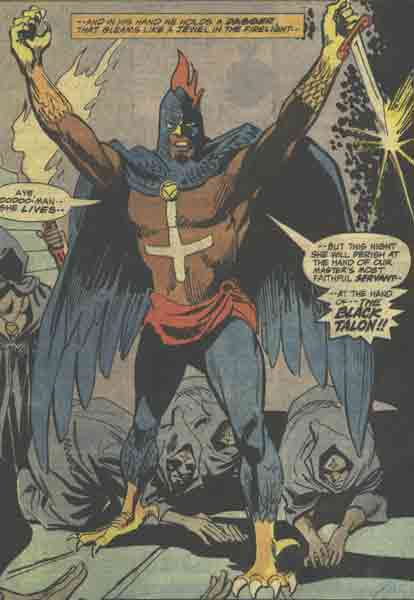 I get that he's a big scary voodoo guy, but somehow he missed the point that while chickens commonly appear in voodoo rituals, it's almost always as a result of having their heads chopped off and their blood drained into a bowl for drinking!

Besides the alarming connotations (has he never even HEARD of KFC?!), this costume has other problems. First, you never want to consider an outfit that involves a diaper. If you're incontinent or prone to wetting yourself when danger threatens, maybe super villainy isn't your ideal career choice.

Second, the hard and fast rule of super-adventuring is that no one can successfully pull off a bird beak as part of their headgear. Not even Hawkman.

Finally, no costume should ever involve bird feet. Ever. They look ridiculous and will inevitably trip you up if you need to flee the scene which, let's be honest, is quite likely if you're oblivious enough to name yourself after a chicken.