In honor of last week's contest, which featured some inspired updates of Golden Age characters to modern times, and considering that this is Bad Super Hero Costume Wednesday, I wanted to bring you an example of a professional, real-world update gone horribly, horribly wrong: 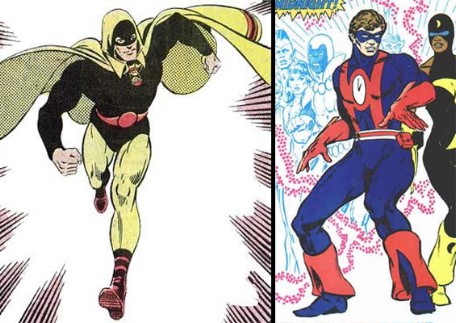 On the left is the original "Hourman", and in my opinion he looks pretty darn good, even to a modern eye. I dig the simple black and yellow color scheme, reminiscent of the moon at night, and the black mask with the cowl, even the authentic hourglass around his neck. He's a cool looking dude clearly ready to kick some villain butt.

Forty years later, however (image on the right), when DC revived the character he looks like someone threw Superman and The Manhunters into a blender and printed whatever came out. Nothing about this costume fits the concept, not even the absurd clock logo wedged between the stylized giant H.

Look, in general if you have a gigantic letter sewn into your outfit anywhere outside the chest insignia region, you're in trouble. Return your clothes to the tailor and ask for your money back, because even though you don't know it, the odds are good you look silly.

Blue and red are overdone, too, and for a time-based guy it just makes no sense. Primary colors are for daytime dudes flying around in the sun, who have enough powers to incinerate anyone who laughs at them for dressing in their PJs. And let's be honest, no metahuman who carries his valuables in a teeny tiny fanny pack pouch attached to his hip is going to be incinerating anyone.

I can't decide what I hate more, the lady purse or the color scheme or the absurd boot-tops-without-a-boot on his feet. Maybe the "Captain America R Us" store ran out of the actual boots, or maybe his wallet fell out of his purse and he couldn't afford the entire set, just the tops, but either way that's just a ridiculous look.

If you look so silly that even someone in a black body stocking with a huge yellow crescent moon on their chest is trying to slink away so they won't be seen with you, you've got yourself a bad super-hero costume, folks.

Never mind a whole hour, I don't even give this get-up the normal fifteen minutes of fame due your average Pauly Shore type. Truly a case of "they should have left well enough alone." Or hired one of you guys to redesign it, because clearly, you're way better at it than the pros, at least in this case.