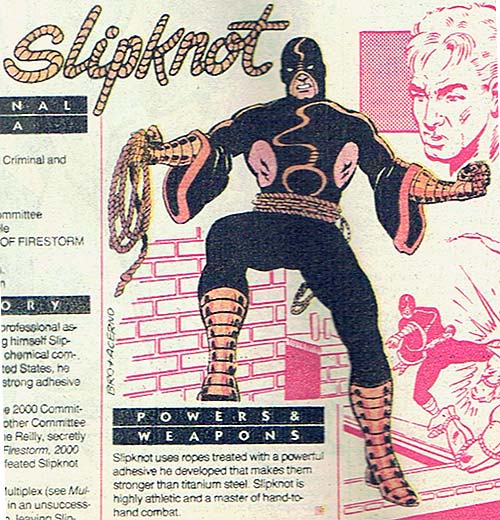 He's got one rope lassoing his face, and the other about to ensnare his package. One can only assume this outfit was designed and stitched by his passive-aggressive wife, too afraid to outright tell him to keep both his mouth (and everything else) zipped, and so reduced to this subtle yet menacing textile rebuke.

You'd think two obnoxious rope elements would be enough, but you don't get to the top of the second-rate super-villain ladder by taking half measures, my friends. No, you see those two ropes and you raise yet another one, this time actually tied to your waist. Undoubtedly it's there as an emergency backup lassoing device, which then raises the question of how menacing he'd be with his pants falling down. Or maybe those are sans-a-belt slacks; he's certainly clever enough to have thought that far ahead.

Or at least, not if you consider the evidence of those armpit cutouts so everyone can enjoy his manly aroma and the super-baggy sleeves. Seriously, how does he even throw the rope with those sleeves? "I have you now Firesto -- crap! One sec, tangled on the sleeve ... there! OK, now -- CRAP!"

I don't even want to know why he has metal boots and gloves. I've been to my share of rodeos, folks, and not once did I see a cowboy roping with metal gloves. I'm just sayin'.

Of course, they also weren't about to get the ol' block and tackle lassoed by their seamstress wives, either, so maybe the use of metal covering in strategic locations is a good idea for ol' Slipknot. And suddenly it becomes clear why he might prefer running around town in that outfit to going home every night ...

15 Responses to Slipknot, not.