The wrong kind of laughter

Note to any aspiring super-villains out there: Don't let your costume be designed by someone with the express intent of appearing as a character in a radio-only drama, because the Promotions Department might just pull a gag on you like they did on poor Molly Maynne, aka "The Harlequin": 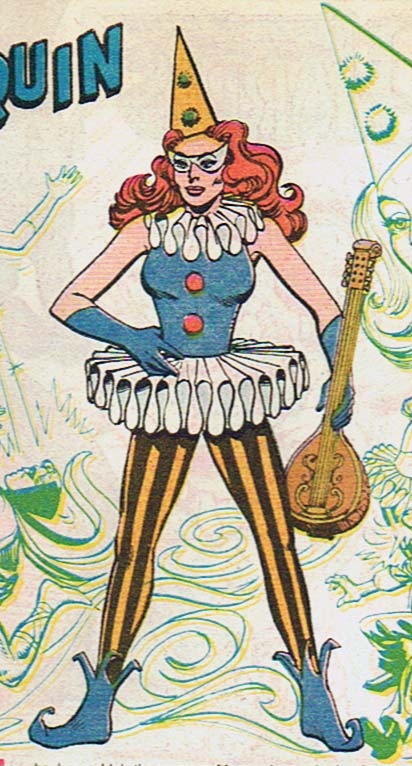 You might ask why you need a costume for a radio-only drama, but maybe that's just how they rolled in the Forties. And granted, a Harlequin is supposed to be an entertainer, but ye gods! Seeing some poor deranged woman staggering drunkenly up to me sporting a dunce cap, striped leggings, curled-toe shoes, and Queen Elizabeth's neck ruffle around her waist would probably inspire more pity than fear.

But then again, since her power is in her super-hypnotizing glasses, maybe the whole point of the outfit is to be so horrifically bad that onlookers are momentarily stunned, giving her a chance to slap the ol' googly-eyes on 'em. If so, it was brilliant, because I frankly can't look away. Just keep telling yourself that the feeling bubbling up inside is joyful laughter and not incipient nausea, and no one gets hurt except your keyboard.

26 Responses to The wrong kind of laughter