HM3: The ears have it

I added a few new Ears to the Standard set, including several intended to help make your own Headgears look right. Here's a sample character created with the new items added today: 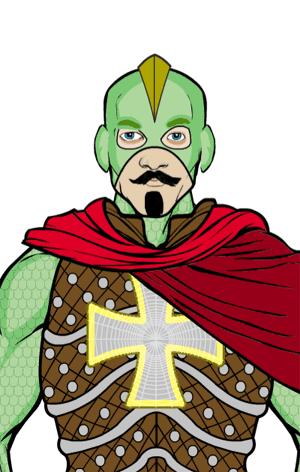 The mask consists of one of the Standard Heads, colored green; four eyes, two of which act as the mask's eye holes (colored flesh tones), the other two of which are normal eyes layered on top; the circle Insignia, masked onto the Head and scaled horizontally to make it an arc and then colored flesh tones to make it look like the mask's mouth opening; two of the new ears, colored to look like regular ears covered in cloth; two Eyebrows, with the right one moved behind the eye openings so the second color gets clipped off rather than intruding over the mask's cutouts like the left one; and the rest of the normal facial features.

It's more cumbersome to do it this way, but man, you can get some really nice effects. I could use that same basic setup and swap out a triangle Insignia to serve as the mouth opening instead. Or use the Square Insignia masked to the Head to make it look like the mask cuts off at the forehead. Or or or ...

Yeah. Lots of possibilities. Have fun, holler if there's something not working right!

Oh, I did notice that using the Insignia for a mask mouth opening kind of screws you for using a nose ... I haven't thought through what to do about that.

18 Responses to HM3: The ears have it