HM3: My mind is just FLAYED

With thanks to Brian in the comments of the last thread, I give you a Mind Flayer type of squid head: 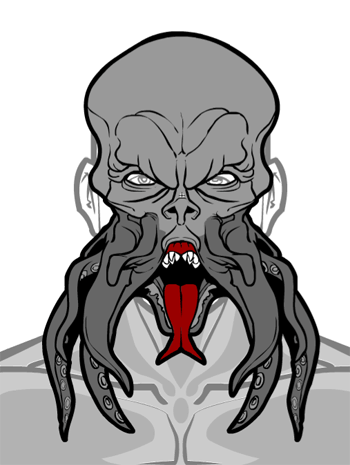 It was such a good idea I jumped on drawing it before realizing that this isn't really an "animal" head. So I put it in the Head slot's "Aliens" set. Where it sits as the only current member, and which won't get any more fully developed until I get the rest of the "Standard" slots filled. Which is unfortunate. So, I share it here so you can at least see how cool it is, because come on -- that's cool looking.

Incidentally, this is what it looks like while I'm actually in the source Flash files drawing these things. I have the default body template grayed out in the background so I can make sure everything is where it's supposed to be and that it looks good on the figure. The light gray area is color1, the dark gray area is color2, and obviously the black lines are the lineart. The white and red are uncolorable areas, which you're typically going to only see on things like these all-in-one heads, spots that are going to be the same color 99% of the time but which aren't covered by one of the main three color areas.

39 Responses to HM3: My mind is just FLAYED