I've just updated the HeroMachine 3 Alpha with the GloveRightStandard set of items. In retrospect I bet I'm going to have to change that to GloveRightMALEStandard, but oh well. Here's a quick taste of some of the new items: 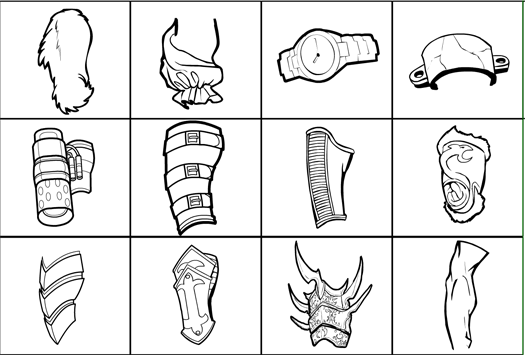 Like with the shoes, let me know any gloves you'd like to see but don't, or any weirdnesses you encounter. I'm going to keep it just to the right glove for now, until the set is finalized, then I'll swap them all over to the left side. In the meantime, you can use Multiples and flipping to get matching items if you like.

I also wanted to note that if you're using one of the alternate arms, you can still get a good glove on it by picking one, rotating and scaling it to where it mostly fits, then Masking it with the arm piece to make it conform if it's one of the skintight ones.

Finally, the applet itself has one fairly major update to it. Mousing over an item now fades it to 50% transparent instead of giving the blue glow. I am testing to see if the glow is part of the reason trying to mouse around in the canvas area is so slow when you add enough items to the stage. I also think it might make it easier to position items if you can see what's underneath it. Let me know what you think of the change, it's easy enough to go back to the old way if people prefer it.