Why isn't it ever "Hero Guy the Honky"?

This week's installment of Bad Super Hero Costumes focuses more on the broader issue of Black guys who are super-heroes, and why they always have to have "Black" in their name. It's never "Superman the White" or "Batman the Pasty", although I'll have to go ahead and give you Gandalf the Gray. But dude was hanging out with hobbits, you know, the racial thing just doesn't play when you're worried about Sauron turning everyone into orcs, you know?

Which brings us to "Vykin the (of course) Black": 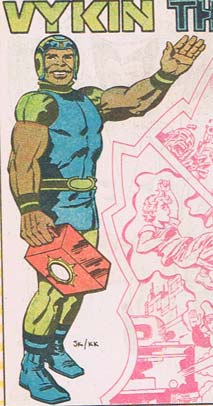 First of all, from a purely sartorial standpoint, he looks like an idiot. He's wearing athletic socks. Blue athletic socks. That's just not cool, especially after middle school's over. Take in the matching sweatbands and the skull-sucking awesomeness of an old-school leather football helmet dipped in avocado and you've got yourself a fashion disaster.

But that's not the worst thing.

It's not as bad, for instance, as having one Black guy on the team and sticking him with "The Black". We can see he's Black, do you have to point it out right in his name? If he were working for The White Queen, maybe, but that's a totally different title and the connotations are different, so don't try to get smart with me. And yes, to their credit Marvel did drop "The Black" in later years.

But that's not the worst thing.

I can forgive blue athletic socks, even though it pains me. I can forgive the subtle racism of his moniker. But what I can't get past is that they a) put him in a lawn ornament pose and b) gave him the job of carrying the team's m----- f---ing luggage! Yes, the main job of the only Black guy on the team was as follows, and I quote:

"It is Vykin who carries the Forever People's Mother Box."

Let's all just have a moment of silence to be thankful that the Sixties and Seventies are over, folks. At least now they don't make Black Lightning or Black Mass or the Black Panther carry the team's bags. That's just low, man.

5 Responses to Why isn't it ever "Hero Guy the Honky"?