HM3: The pitter-pattern of a new release's little feet

And with that I hopefully am out of "pattern" puns. In any event, I've just posted an update to the HeroMachine 3 Alpha (use the "HM 3 Preview" button in the header) that includes 24 new semi-transparent patterns in addition to the 8 the program already had. The complete list of patterns is now:

That's probably going to be it, because there are now enough objects in the basic shell app that it's starting to slow down. I think Flash CS3 has a problem when you put too many things in the library, it really slows to a crawl. If I add too much more it's going to be really irritating to work on.

In addition to those 32 built-in grayscale patterns, there is now a "Patterns" slot with one set of items, "Standard". The items in this set are just like any other items in that they can be colored, sized, rotated, etc. To get the effect, load up the item you want to be filled with the colorable pattern. Then load the pattern, click "Mask", and click on the target item to be filled. Just like any other masking effect.

The nice thing about that is you can, for instance, have blue stars with a sprinkling of yellow ones filling a dark blue body. Or red and orange flames scaled to size to fill a deep red body, making it look like he's full of fire. With the integrated grayscale patterns you can't do that, you have to rely on the color of the original item to carry off the effect.

Here's a sample of what I mean, with the "loaded as an item, colored, and masked" effect on the left and the "just use the built-in grayscale pattern" on the right: 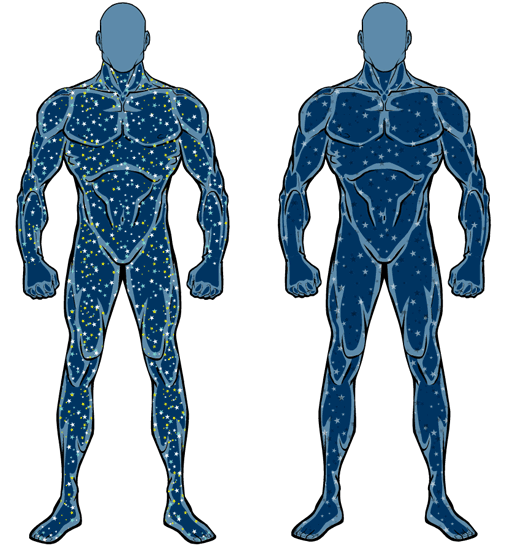 Should I keep both the integrated patterns and the loadable, colorable set? One or the other? Neither?

21 Responses to HM3: The pitter-pattern of a new release's little feet