Congratulations (and a custom black and white illustration of whatever he likes) go to this week's Caption Contest winner, Danny Beaty! 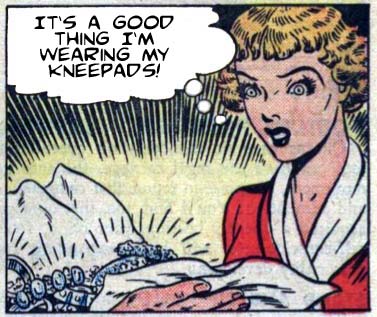 The overall number of entries this week was down a bit, but the quality was actually higher, so many thanks to everyone who entered. I particularly wanted to call out the following Honorable Mentions for Meritorious Service in the Interest of Humour:

Blue Blazer was actually my initial choice, but when I tried to put it in the panel I realized that in her thoughts she wouldn't be speaking directly to him, she'd think "Does that happen EVERY time he sneezes?", so I felt Danny's fit better with the scene as drawn. Similarly, xStacy was close, but "the jewels" instead of "their jewels" let Danny nudge ahead.

Regardless, Danny's was (IMHO) the funniest entry, but all of the Honorable Mentions were excellent -- a hearty congratulations to them all!