I've been called out before for saying Rob Liefeld's early Nineties Image work was lazy. To belie such baseless and scurrilous refutations, I present just one piece of evidence out of the dozens I could have chosen from the Liefeld written/created/pencilled/inked "Youngblood" number 2: 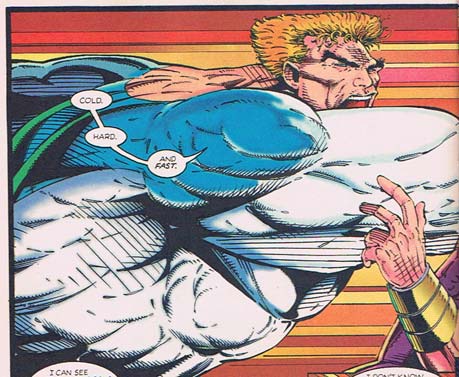 Seriously, look at his head. Notice how flat the top is -- usually you've got about as much space above the eyeline as you do below it. And look where it's positioned on the neck in relation to the torso. It ought to be back about two inches and about an inch higher, if this were an actual human figure being represented.

One explanation might be the aforementioned self-decapitation due to force-of-blow. But I think we all know that's BS.

Another explanation might be that Rob Liefeld is a genius who is dynamically reinterpreting human anatomy to reinforce the awesome action being portrayed. But I think we all know that's BS too.

The simple answer is, Rob Liefeld ran out of room to fit the figure into the panel. He roughed out where the torso and arm and punch were, and didn't notice that he hadn't left enough space to squeeze the head in at the top.

So rather than resketch the layout, he just decided to squash that sucker in there wherever and however it fit, anatomy be damned.

And that, my friends, is just flat out-and-out lazy.

(Note: I'm renaming this category "Reasons I Hate Rob Liefeld's Art", with Reason #1 being "He doesn't understand human feet face different directions". These reasons are not in order of how much they make me hate his art, they're just kind of random. And I didn't name it "I hate Rob Liefeld" because I don't even know him; he might be a swell guy. I just hate his art.)