Halloween Jack and I have finished his very funny prize for winning Caption Contest 37. He wanted a parody of a character featuring as many 1990's-era Image cliches as possible, and here's what I ultimately came up with: 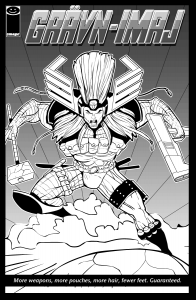 I tried to throw in everything I could, including:

The thing about it is, I kind of like the drawing! That's the power of seduction that is Rob Liefeld. It all looks really hawt on first glance, until you look closer at it. But hey, that formula netted him millions, so who am I to bitch about it?

Unfortunately Halloween Jack is out of town on vacation until the end of January so I couldn't get this approved, but he told me to go for it and post it whenever I felt it was ready. It's a lot different than the last thing he saw, hopefully he'll still be pleased.

Don't forget, you can win your OWN custom black and white illustration of whatever you like if you win the HeroMachine Caption Contest 41, going on right now!

You also still have time to enter the UGO Games contest to design the coolest-looking modern warrior. If you win, your creation will be the featured character in an actual online video game, which is awesome. So get busy!