Do they have Velcro in Elfland?

Look, I get it, I really do -- men like breasts. As a man, I like breasts. It's one of those hard-wired, involuntary-parts-of-the-brain things, I can't help it. They bypass all the centers of higher reasoning and short-circuit the entire mind-body connection, like pulling the plug on a toaster. I consider myself a fairly enlightened member of the gender but nonetheless, breasts (and of course the wonderful female human beings they're attached to) are tremendously important in my life.

This is not, of course, revolutionary information, as anyone who's ever seen a magazine, movie, television show, or college campus is pretty much in on the secret. If sex sells, boobs seal the deal, it's just the way the world works. And since much of my life is now spent in comics, and in particular super-hero comics, they're pretty much being thrust from every spandex outfit in the multiverse. Add in that I also read a fair amount of fantasy and it's even worse.

But the abuse those poor oversized glands are subjected to is, frankly, appalling. Can you imagine wearing underwear strapped to your sensitive bits that's made out of chain mail? Cold, hard, ouchy metal rings, ready to snag and blister and pinch at every movement? And yet even so savage a woman as Red Sonja is forced to leap about so clad.

The biggest reason for this, of course, is that most comics are drawn by men who never quite made it out of adolescence (guilty as charged, your honor), and who thus don't really quite understand breasts. Not having them ourselves, that's understandable. So they get jammed into tights that would suffocate the woman trying to squeeze into them, revealed through gauzy silks, asked to defy gravity by not beating their bearers to death while flying at high speeds in a heavy head-wind, and much more. At this point I've pretty much just given up on expecting anything even vaguely realistic on the comic-book-boobs front.

And yet, sometimes I stumble upon an outfit so inane that I am brought up short and have to go whahunh?! Case in point, "Warlands" number 6, a 2002 production from DreamWave in Canada: 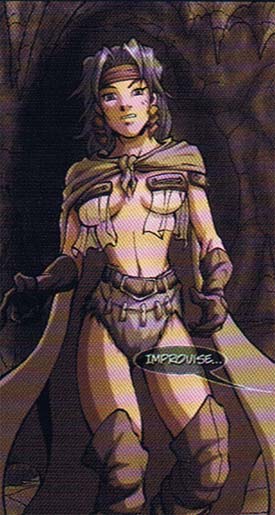 My question here is, just what in the name of all that's holy is holding those breast bands on? Take a closer look, they're basically rectangular boards unattached in any way to any other part of her outfit. They have two holes in them, with a rope running between them, which is the kind of thing you usually see when the top piece is tied to a bottom piece. Only there ain't no bottom piece here. Which leads me to the profoundly unsettling idea that those boards must be held on by being tied to her nipples.

Excuse me while several different sphincters contract in sympathetic horror upon thinking about that.

I've wracked my brain, but I can't figure out anything else. Magic, of course, or maybe some sort of Elfin Velcro, I dunno, but that just doesn't look comfortable. And what's the point of suspending two sheer Bounce tissues from the boards?

All in all, this is one of the more bizarre "Bad Costumes" I've seen in the course of writing this feature. I feel badly for the Elfin girl shown -- not only is she having to go out in wrapped thigh-boots, furry underwear, long ggloves, and a frankly painful looking set of earrings, but she's got very sensitive bits of her anatomy wrapped up in some kind of sick bondage scheme. Galadriel will not be pleased.

18 Responses to Do they have Velcro in Elfland?