I suspect that somewhere deep in Super-Hero Comic Book Publisher HQ is a machine whose sole purpose is to take a random animal and mash it together with the word "man" to produce a new character. That's about the only explanation I can come up with for Marvel's "Frog-Man": 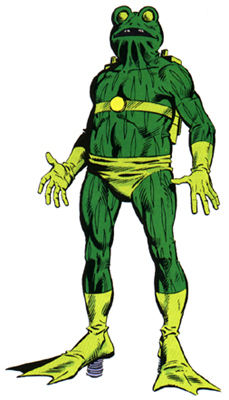 The Frog-Man costume is worn by student Eugene Patillo, and as a character he's played for comedy. Which doesn't excuse this outfit, from the Cookie-Monster-like mouth hiding the eye slits to the bad color scheme to the most egregious offense against the costume gods -- a pair of Underoos covering a frog's genitals.

First, look, this is a family blog, but come on -- amphibians don't have external genitalia. That's just a biological fact, or at least a fact-like statement I made up without checking against Wikipedia because I'm just that lazy.

I'm not saying Vincent Patillo's little boy is an idiot, but at least judging by that outfit he's a few lily pads short of a pond, if you know what I mean.

(Frog-Man © Marvel Entertainment Group, Inc. And they're welcome to it.)

12 Responses to The Frog-Man cometh