Here's a screen grab of the interface I am proposing for the upcoming "Modern Warrior" style HeroMachine Mini: 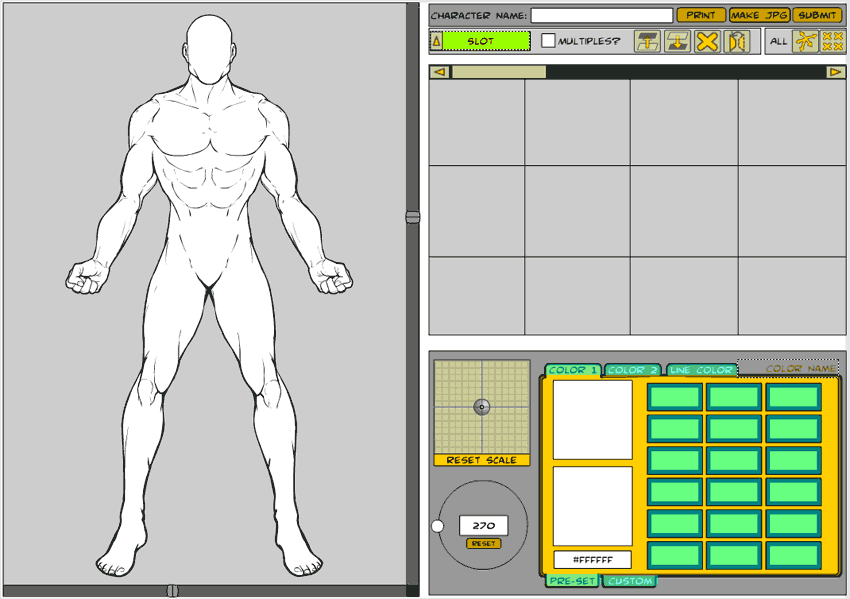 More explanation after the jump.

On the left, obviously, is the character portrait area. Like in the FaceMaker, you'll be able to click and drag items here to position them wherever you like once they're placed.

On the right, starting at the top, we have a spot for entering the character's name, a free-text field. I think having it in the actual character image like in HM2.x is kind of annoying.

Next are the three global action buttons, so you can print your design, turn it into a JPG (like in the FaceMaker), or submit it for saving online. I am not planning on outputting a text string like in previous HM versions, for reasons related to the project itself which I unfortunately cannot divulge at this time.

The next row starts with the "slot selection box", where you pick which item slot (Head, Torso, Right Glove, etc.) you want to work on.

The "Multiples?" check box determines whether or not you want more than one of the current item slot to be possible. In other words, if you want two swords AND two guns AND three daggers for the hand-held items, go for it.

The next four buttons control the current item, moving it up a layer, down a layer, removing it from the stage completely, and mirroring it (flipping it left-to-right or vice versa like in a mirror).

The next two boxes affect everything on the stage, either for a completely random figure or to clear the stage entirely.

Previews of each possible item in the current slot occupies the next area, with the same scroll bar above it for navigating the next twelve previews in the series. Click on an item here to load it into the slot on the character stage. If you have "Multiples" checked, then the item gets added to whatever's already there. For instance, let's say you already have one logo present, but you want to add another while leaving the first there. You'd check the "Multiples" box, then just pick as many additional logos as you want. If you want to replace the current one, removing it in favor of a new one, leave the "Multiples" box unchecked and everything works just like other HeroMachines -- one item per slot.

Finally, at the bottom is the item transformation area. Here you can scale the current item or -- and this is new -- rotate it. To the right of those controls is the color creation/selection area, which will work just like in the FaceMaker, only with more custom color slots and more pre-defined color swatches. And, I hope to have an area where you can enter your own Hex value for a color.

All of this is still in the planning/layout stage, so it's entirely possible -- likely, even -- that not all of this functionality will see the light of day. I hope it all makes it in, of course, but something might have to go in the interest of time.

Anyway, if you have any suggestions, comments, or ideas, by all means please let me know in the comments.