I spent a big chunk of the weekend working on the template for the upcoming HM Mini, and wanted to get your thoughts on it: 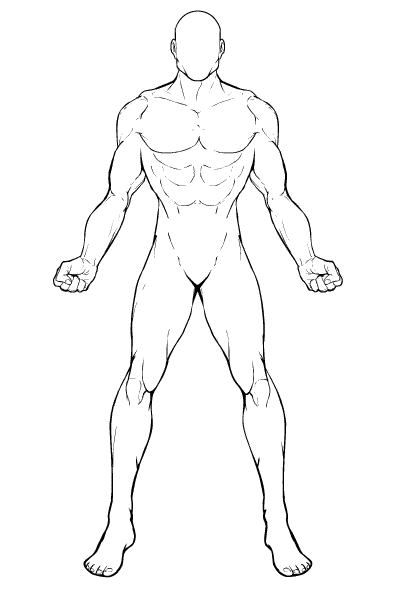 At this point I'm thinking the entire head will be one slot, consisting of the outline of the skull, the jawline, and the chin. Hair, facial hair, and the face would be separate slots as well inside the head slot. This means that when you scale (resize) or move the head, the face and beard will transform right along with it.

The hands also will probably be their own separate slot. That hasn't gotten a lot of traction in HM2.5, but I think partly that's because it was an add-on rather than being a core part of the program from the beginning. I really think having the ability to change out the way they're posed will help make the figures more distinctive.

Flash now lets you dynamically declare one movie clip (which is what the "slots" are) as a mask for another. So what I'll probably do is have one slot for "Hand-held items" with a drop-down box for you to choose another slot to mask it out with or not. That way if there's a cool sword you like, for instance, you could either drag it over the belt to make it look sheathed behind a sash, or you could drag it over to a hand and mask it so it looks like it's being held, or you could drag it over to the back and mask it out with the body so it looks like it's in a back sheath.