Do you love your country or are you just happy to see me?

As you know, the 31st century's "Major Victory" homage (which is French for "rip-off") to Captain America inspired this week's character design contest. But I ain't letting him off that easy, no sir; you wear a costume that bad and you deserve all the super-powered costume mockery I can muster. To refresh your memory, here he is again, leaping into glorious, bulging, oh-my-god-what-is-that-on-his-crotch battle: 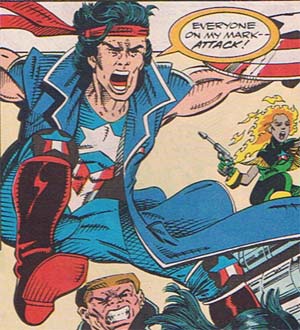 Is he jumping into a fight, trying to pass a particularly large kidney stone, or just showing he's really really excited to be dressed as Captain America? Now I'm not going to judge anyone for how they get to their "Happy Place", but if you can't keep control of Little Bucky in the middle of a clash between the Punisher gang and gun-toting, drool-slinging aliens, you've got more serious problems than just a bad hair day.

But by all means, please don't let the fact that a hero's thoughts have turned to love distract you from how awful his outfit is. Let's start with the body-length bandanna, which for my money is even more potentially lethal than a long flowing cape. You get that bad boy sucked into a turbine and it's good-bye top of the skull, and given the obvious loving care and attention lavished on that coif, it would be quite a loss indeed.

I get that this guy was inspired by Captain America, and that's why he's blatantly stolen Cap's torso design -- big white star, blue background, midriff-high stars and bars and all. But what really makes my skin crawl is the sleeveless trench coat, which apparently is made out of some sort of rigid plastic material which causes it to flow in the opposite direction from the bandanna and the vector of the leap. You wear a trench coat because -- stay with me here, English majors, this gets all science-y -- it's cold outside and you would like to stay warm. Ripping the sleeves off of the coat, thereby exposing your unclad arms, would tend to negate this heat conservation strategy. As the great Khan said, "Revenge is a dish best served cold. It's very cold in space, Kirk. So wear your sleeveless trencher!"

I can almost, almost forgive that fashion faux pas, though, because let's face it, geeks like us love trench coats. If you don't believe me, rent "The Matrix" some time and count the London Fog-inspired outerwear. Bring a calculator, too, you'll need it.

As I was saying, I can just barely get past the coat but I can never, ever forgive those knee pads.

First of all, you shouldn't be kneeling if you're a super-hero. You should be making the other guy kneel to you, not vice versa. Come on, this is super-powers 101 stuff here, I mean Dr. Doom knew this kind of thing when he was still in the womb (did you know Dr. Doom slapped the OB/GYN during delivery for daring to touch him uninvited? True story.) (OK, not really.)! Second, I believe the logo on the knee pads is the official badge of the Guardians of the Galaxy.

You don't kneel on your own badge, people!! Granted, I'm from Texas, where we still hate Terrell Owens for grandstanding on the Dallas Cowboys logo at mid-field, but there are some things you Just Don't Do, and trashing your standard is one of them. Can you imagine Captain America wearing US Flag underwear? Perish the thought!

So, ok, the outfit is not good. But what's worse is, this guy's flinging around Cap's shield with telekinesis. Telekinesis!

Cap seemed to manage just fine without any fancy-schmancy mind-powers, hurling it to devastating effect with muscle power alone. But apparently that's too much for Major Victory, even with his super-strength. I guess what they say is true; you can inject ionic blood into a man, but you can't inject manliness. Pathetic. Super-heroes (the male ones, anyway) are supposed to be manly men, doing manly things in a manly way with a manly sweat. I'm not saying TK is effete, but using it to toss the shield of the guy you're trying to imitate is! Grow a pair next to whatever that is you're sporting in that panel, pal, and throw it like a real American hero!

And your first target ought to be that pervert giving your bum the squint-eye at the bottom of the panel, because that's just wrong.

6 Responses to Do you love your country or are you just happy to see me?