I am willing to bet one full-color professional illustration that you are a better super-hero costume designer than Jim Valentino, who in 1992 gave us Major Victory from "Guardians of the Galaxy": 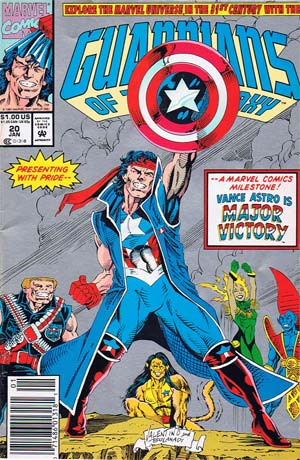 Like most patriotic heroes, he sucks. From the knee-high red boots with badge-encrusted knee pads (planning on kneeling much, Major?) to the shield, the awful headband, and -- last but certainly not least -- the bizarre sleeveless trench coat, he'd be more aptly named as "Major Derivative".

I think you can do better. Upload your HeroMachine creation to the PhotoBucket group album I've set up (called "PatriotHero") and after one week, I'll pick the best five designs (free registration with PhotoBucket is required). I'll put up a poll for folks to vote on the one they like best, and the winner gets a free custom color illustration by yours truly of whatever they like. I'll even print it out and mail it to you if you want.

If you don't want to sign up for a PhotoBucket account, just email me your submission and I'll take care of it for you. Or you can put a link to it in the comments, and I'll save it to the PhotoBucket group.