Mashup 24: The Bride of Xemnu!

I knew the weekly Random Comics Mashup this week would be a tough one when I saw three issues each of Marvel's Airplane-like book of silliness "What the --?!"; the Jackson Guice soft-core-porn-inspired "Doctor Strange"; and the "John Byrne is on acid" run of "She-Hulk". Add in the fact that one of the guest stars in one issue was Santa Claus, another was perennial "Bad Super Costume" favorite Razorback, and yet a third featured zombies fighting vampires, and I sat down at the scanner with a really bad feeling.

Hopefully this will all hang together, and by taking one (and only one!) panel from each of the ten randomly selected issues I can bring you an entertaining tale!

Five years ago, in a ramshackle section of Haiti, a dying voodoo shaman passes on his last command to his young apprentice. 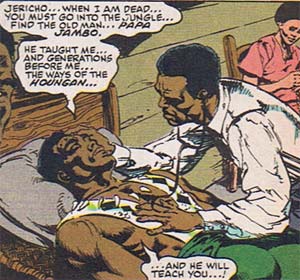 A month later, outside a mansion in Manhattan's exclusive Bleecker Street ... 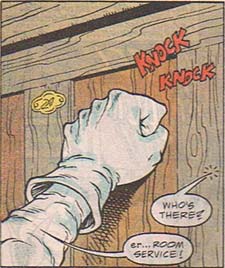 For Papa Jambo was found not in the jungles of that faraway nation, but the concrete urban jungle of New York City, and over the next five years he trained the young shaman rigorously until at last it is time to graduate ... 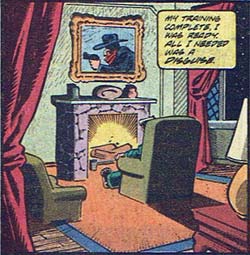 His advice is, to say the least, if not the last thing Jericho expects, still pretty far down the list.

Meanwhile, at a small mountain drilling site just outside the city ...

Unfortunately the successful completion of the drilling into the supposedly empty cavern has explosive, literally earth-shaking results.

Even as whatever it was makes its way from the formerly hidden mountain chamber, other enemies of Papa Jambo and Jericho have decided to take advantage of the quake's distraction to strike at last! 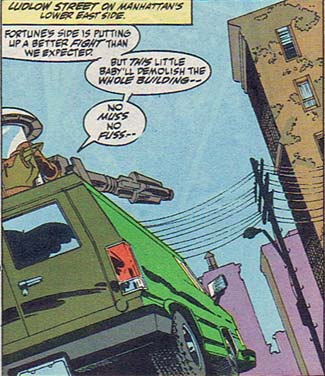 As the outer wall of the mansion is stripped away, Jericho gestures and nods as Papa Jambo had directed, and at last has the disguise long worn to protect her in a man's world stripped away, revealing not a poor frightened boy from Haiti, but the strong and lethal Hellcat! 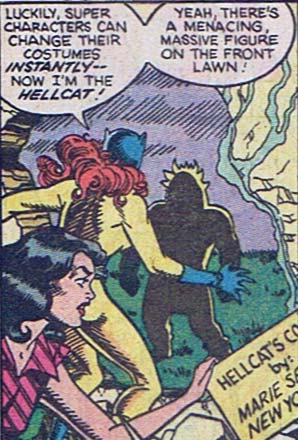 Yet when she leaps forth, she sees the mysterious, hulking stranger from the mountain cavern has already destroyed the marauding tank, and has a shocking announcement: 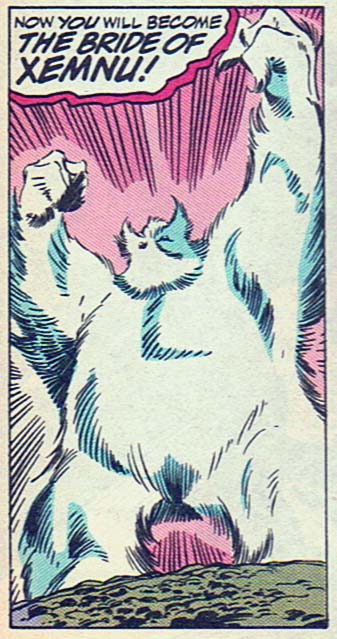 To the accompaniment of a snide comment by Papa Jambo's assistant, of course.

How had the beast known Jericho was a woman, much less where to find her, and why does it seek the abomination of marriage between demon and shaman? Tune in next week to see the exciting conclusion!*

*Not actually continued next week. Or ever. Although Xemnu is kind of cute, for a "bear".

The images above are from the following comics, in order of appearance: