I suppose if you're going to name your super-hero self after a cheap and fruity wine beverage, you ought not to be surprised if your costume also looks cheap and fruity, as if you've just staggered out of "your" alleyway after a long drunken night of homelessness: 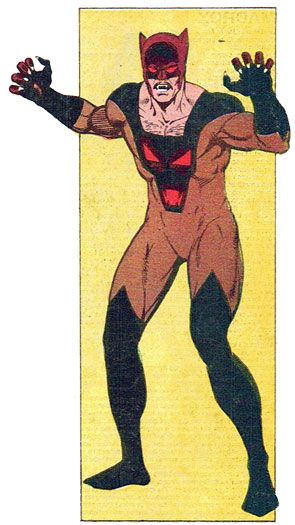 Perhaps Marvel intended this character as a "What If Batman Became a Wino" sort of thing, but I can't imagine Bruce Wayne sporting a nifty pencil-thin mustache like that no matter how debased he became. Or maybe this is actually Bruce and Selina "Catwoman" Kyle's love-child, I don't know.

Whatever the case may be, you'd have to be pretty hopped up on MD 20/20 to combine black thigh-boots with a plunging, chest-hair-exposing collar like that. The creepy demon face logo and angry manicured nails complete the image of the angry wino looking to get back a little of what's his. Or at least another bottle of cheap hooch, whichever's easiest.