Because nothing says "Macho Universe Destroying God" like a beer gut

Posted on August 6, 2008 by AFDStudios | Comments Off on Because nothing says "Macho Universe Destroying God" like a beer gut

As I mentioned in the Mashup credits, here’s a free tip for any of you comics industry bigwigs out there. If your project requires a scripter and a plotter, two pencillers, and three inkers, it’s going to suck. Witness “Trinity”, an unholy multi-space-going-comic-characters crossover featuring L.E.G.I.O.N., the Green Lantern Corps, and the Darkstars, with all of the cringe-inducing anticipation of crap you, the savvy reader, would expect.

What really caught my attention about this Space-Borne Spectacle of Suck, however, was the beer-belly-baring badness of Tzodar the Destroyer: 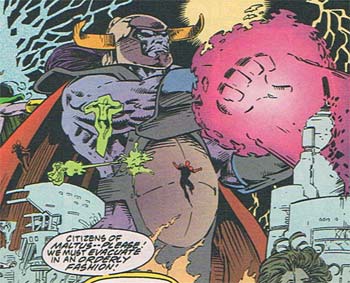 Here you can see just how large Tzodar's gut is by virtue of the unnamed hero getting unfortunately sucked into his belly button. Luckily, when you're a god you get to have the best fashion designers in the universe put together your outfits, which is why his armor has a convenient cut-out so his love handles can flop around in all their glory while he's busy destroying creation. "Oh no," I can hear you saying, "that's just an armor plate, not his stomach!" To which I can only reply, why do you hate America?

But that's not all this paragon of fashion has brought to the table my friends, oh no! Why stop at a Madonna-inspired midriff-baring ensemble when you can add a long, flowing pony tail and ridiculous cloud/stopwatch/what the hell is that?! logo to the mix! 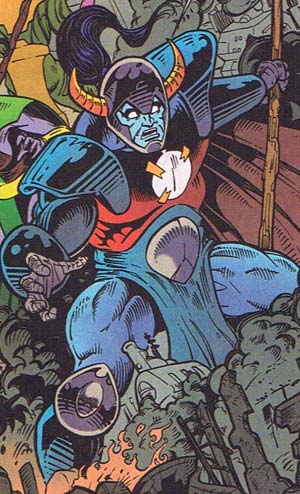 Because nothing says "I'm a butch macho god" like a long greasy pony-tail and your ginormous bloated stomach hanging out of your shirt. At least that's what I've been assuming in my weekly jaunts to the local grocery store which, now that I mention it, might explain the strange looks and continued police presence I find there. A police presence which, frankly, would have been better off escorting those responsible for "Trinity" and Tzodar's outfit off to jail before they could have published this comic.