I guess Steak and Ale was taken?

I'm not going to claim that Jack Kirby got his ideas by looking at stuff on his desk, or from the remains of his hastily-heated discount noodle lunch. But I do wonder how much of his time was spent at bad steak joints while coming up with his scripts, because this: 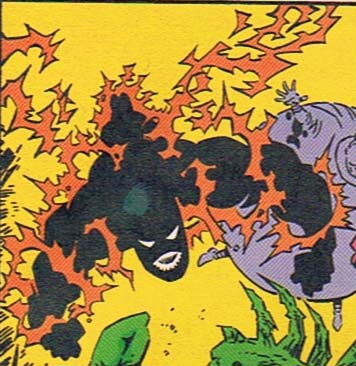 Is "Sizzler". Yes, that's right, this electrically-charged flying slab of grill grease is named after a nationwide purveyor of seared cow flesh. Luckily, he's a villain. Hopefully after his thrashing at the hands of Silver Star he can get back to home base, the "Sirloin Stockade", and kick it old-school with his sidekick Shoney Big-Boy.

I can't get that scene from "White Men Can't Jump" out of my head, when Wesley Snipe's idiot friend keeps chanting "We goin' Sizzler, we goin' Sizzler!" after they win some money. This is a good case of a pretty decent looking character betrayed by a lame name. Would "Rocky" have been successful with the same script and actors if it were titled "Jackrabbit P. Fusslepott"? Certainly not!

And so Sizzler, despite springing from the pen of the great Jack Kirby, I mock thee.

4 Responses to I guess Steak and Ale was taken?