I hate feet. They're ugly, they smell bad, and they're poorly designed. The best you can say about feet is that at least they're stuck way down at the end of our bodies so we don't have to think about them very often. But even I don't hate feet as much as Mister Sinister must, because he is wearing two sets of boots to cover them up: 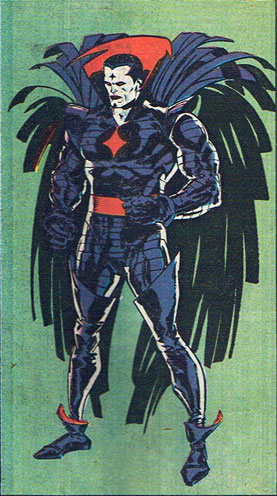 I'm not a fan of flaring hip-boots on male characters in general, but maybe that's just because I'm from Texas, where our boots end at mid-calf. But if you're going to wear them, what in the name of all that's good and right are you doing with yet another pair of flaring boots that end at your ankle? It's just weird, and that's saying something when you're talking about a white-faced, lipstick-wearing, double-starred on head and chest guy with a cloak straight out of La Cage Aux Folles. Seriously, getting attacked by Mr. Sinister must feel like getting mugged by a half-exploded pinata. And that's before he kicks your butt with all four boots.