Master of his rod

While looking over the always-exquisite George Perez-style cover of DC's "Who's Who" (volume VIII), I was brought up short by this gentleman lurking in the background: 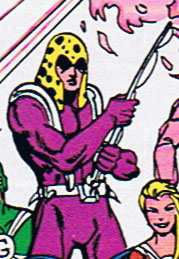 Aghast, I opened the book to discover that he's actually one of Aquaman's foes called -- I kid you not -- "Fisherman". With a name like that, you'd expect to find him asleep in a boat with a line in the water and a six pack in the cooler, but apparently he's a little more motivated than your average angler. More the pity for me, the unsuspecting viewer stunned by the character concept while innocently perusing a comic book cover.

Here's a quick note to all of you future super-hero designers out there: never, ever, ever have a character with large pole sticking out of his crotch. And if for some reason you find yourself doing exactly that, by all that's holy do not force him to grab that pole and jerk it towards his enemy to unleash his powers!

I will leave the content of the dialog balloon (undoubtedly filled with cheap innuendos) for this particular image as an exercise for the reader. Some of you will probably think up unbearably clever and inappropriate things he might be saying, and will post them in comments, which will force me to pretend I am dismayed while in reality I cackle with glee.

9 Responses to Master of his rod