Posted on January 1, 2008 by AFDStudios | Comments Off on The Clock Turns

A new year has dawned, and it's a good time to reflect on what has passed, what may be yet to come, and to take a few precious moments to mock super-hero costumes that don't know when they, too, should just let their theme slip quietly into that good night: 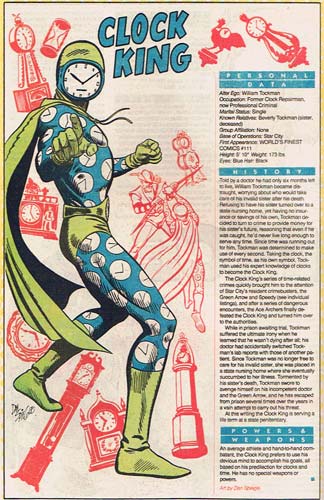 Clock King found a niche and by gum he's going to fill it. I get the feeling he found clock-patterned spandex on sale at Wal-Mart and just couldn't say no. This is the kind of guy who wallpapers his entire house with the exact same print, and then gets throw pillows to match. Other, lesser villains with a time theme might have stopped at just an hourglass insignia, or maybe some arrows on the gloves, but we're talking about chronological royalty here!

I assume the glass faceplate is opaque on the outside and transparent from the inside so he can see, but what about when the time is 9:15 or 3:45 and the hands are covering his eyes? And don't think for a minute that a guy with this kind of theme mania is going to have a non-functional clock on his kisser! I don't even want to think about how he sets the time for the clock in his belt ...