Look, I like a full-figured gal as much as any red-blooded heterosexual American male, but super-hero breasts are just too ridiculous for words. You're flying around at high rates of speed without benefit of an airplane. The wind gusts are incredible. And all you have between your quadruple-D cups and two bloody black eyes is spandex. Not a good design.

The latest example that got me irritated is from the pages of Marvel's execrable "Ultimates 3, Issue 1". Out of nowhere a teenage Valkyrie leaps from her flying horse, sword held high, to slash at Venom. Look at this photo and see if there's anything amiss here: 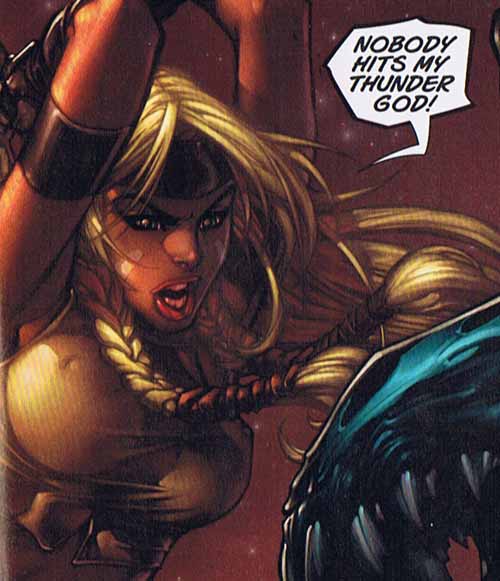 I ask you, outside of horribly botched enhancement surgery, have any nipples in history ever been located on that part of the breast? Breasts just don't do this, boys and girls. Then, of course, you have to ask yourself why there are nipples in this illustration at all. Besides being anatomically ridiculous, they're completely gratuitous -- who in their right mind wades into battle wearing nothing but a cut-off white t-shirt which has, apparently, just been drenched in water by the producers of "Girls Gone Wild"?

There's so much wrong with "Ultimates 3" I hesitate to even mention Nipple-Gate, but the abuse of the female figure in the comics industry is one of those things that really bugs me. Not that the males in this issue fare any better; there are so many guys with forearms the same girth as their biceps I thought I was at a Popeye convention. And every page looks like it was dipped in a black India ink wash. I'd criticize the dialog, but even calling it "dialog" is giving it more credit than it deserves. Bad plotting, bad art, bad writing, bad layouts, bad characters, bad concept, bad expressions, bad everything, this comic book is just bad bad bad bad bad bad bad.

Well, maybe it's not that bad, but Lord it isn't good.