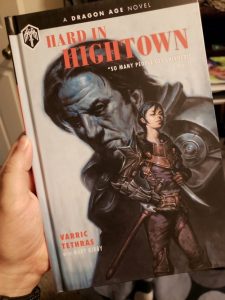 Hey everyone, today we’re doing a book review! I recently got my hands on a long-awaited (as in was preordered for my birthday back in January) book from the Dragon Age universe: Hard In Hightown. I won’t go into any spoilers, for either the book or the games, so you should be good as far as that’s concerned. Let’s see how it is!

Alright, so the first thing you have to understand about Hard In Hightown is that it’s not a lore book that fleshes out the world in the same sense as the other novels, such as The Stolen Throne, The Calling, Asunder, or the canon comics (all of which are awesome too!). The characters you know and love from the games aren’t in this book. This is a fictional book from the world of the games made real. It was written by author, lovable rogue, and frustratingly-unromanceable dwarven companion of both Dragon Age II and Inquisition, Varric Tethras. 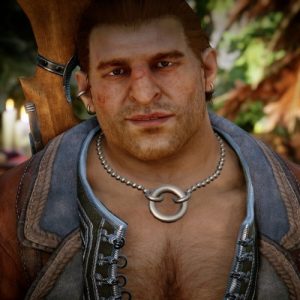 So this is kind of like having one of the Misery books from Stephen King’s work of the same name, or one of Harry Potter’s actual textbooks. So in that sense, it’s a really neat, unique entry into the series. And not only that, if you’re a player of the series, you can pick up chapters of the book for your codex. And now I have it in my actual hands!

So, you might ask, what kind of story is this? Well, it’s a pulpy, noir detective story. And at a modest 70 pages, it’s more of a novella. And when I say pulpy noir detective, I mean it. It leans into that trope hard. It has all the hallmarks: the grizzled detective (or City Guard in this case) who’s too old for this shit and two weeks from retirement, the overbearing police chief (or Captain-of-the-Guard), and the rookie partner. Okay, maybe that’s more 80’s police movies, but the point stands. Then we get into femme fatales, murder, shadowy groups, and ancient artifacts. If you’re on the up-and-up with the genre, I don’t think any of it will be particularly surprising, but it is really fun. And if you’re a fan, you can definitely see that Varric (or Mary Kirby, as the case may be) tends to write his friends into his stories. So those are some really fun easter eggs.

I’m not sure what the negatives would be for the book. Probably that you need to at least having a passing knowledge of the Dragon Age universe for this to make sense. You can enjoy it as a novel on its own, but if you don’t know about the Chantry, or Andraste, or other in-world things, you’re probably not going to get the full picture. The big reveal at the end won’t make much sense if you don’t understand the importance of what it is. I also would’ve been okay with it being longer, to be honest. 70 pages with a number of full-page pictures? That’s literally nothing, especially since I’m a notoriously fast reader.

Overall, this was a super fun read. It’s one part The Maltese Falcon, one part Lethal Weapon. I highly recommend it, but again, it would probably be better if you were a fan. If you are, you should definitely check it out! I would personally love to see more of these. I’d even read Varric’s smutty romance series Swords and Shields, and I don't even like romance novels. 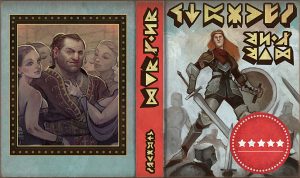 I'm not kidding, this is the actual, in-game cover for it

I’ll leave you with this promotional video where the voice actor for the character of Varric (Brian Bloom) gives you a little preview of what you’re in store for (read in Varric’s voice!).

One Response to Book Review: Hard In Hightown!