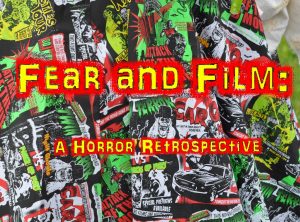 And we’re back! Sorry for the delay, but now we’re back to talk horror again! Today we are jumping to 1909 and looking at D.W Griffith’s The Sealed Room in our second installment of Fear and Film.

In watching The Sealed Room, you immediately find a number of differences from our earlier entry, The Haunted Castle. The first is that there is a much larger cast in this film, with a number of background people that, while not necessarily impacting the story, give the illusion of there being many inhabitants in the castle and serving as the retinue for the king and as maids for his consort. We have also upped our runtime from three to just over eleven minutes, allowing us time for a more in-depth story. It also delivers the horror aspect of the story in a different way from The Haunted Castle, but in a way that is similar even to us today. So let’s have a look.

The first thing I noticed when trying to decide which movie to choose from this decade was that descriptions for The Sealed Room compared it to Edgar Allan Poe’s The Cask of Amontillado. As someone who has been known to enjoy the works of Poe, I was intrigued, which led me to watch it. As I said above, the horror is done in a different, more realistic way than in The Haunted Castle, which relied on its special effects to bring you supernatural creatures that provide the fright. Here, the horror comes from much more mundane, human actions and doesn’t really come into play until the end. I thought this was a really interesting change between the two, and since I want to highlight different kinds of films within the genre, it seemed perfect.

The film depicts a king who has ordered constructed a special room for his consort that has only one door and no windows. When the king and his retinue leave, she and the court’s minstrel make themselves comfortable in the room. The king finds this out and, in a fit of anger, (spoilers, I guess?) has masons wall up the only door and mocks the two as they suffocate on the other side of the wall. So the Amontillado comparisons are certainly apt ones. As I said above, I like that this film has human nature as the cause of the horror element. It makes for a bit of a slower buildup to that element, but it’s more of a sinister and horrifying payoff knowing that it wasn’t anything otherworldly, but something very familiar that brought this end to these two. And it’s something that we as modern movie goers can relate to and appreciate even today, as those human actions are no different now than they were then.

As with The Haunted Castle, this film is silent. You could see that the actors were speaking as they were acting, but unless you’re a good lip-reader, the words will be lost on you. You don’t really need them, though, as the actions tell the story well enough. The version I watched did have musical accompaniment, which was nice. It was fairly upbeat, classical music, not turning dark until the end. That really helped with the feel of the movie, and the buildup I talked about earlier. The acting is again somewhat exaggerated to make up for the lack of sound, although not to such a degree that it is goofy. The set is actually based in two rooms instead of one; the aforementioned one-entrance room and a larger one outside it. The costumes are quite elaborate and invoking a more historical time period, even for the 1900’s.

In conclusion, The Sealed Room is a very interesting film. I love the timelessness of the themes and how they still resonate even more than a hundred years later. It is a slower burn in the horror aspect, but overall still conveys the genre well. I mean it must, we’re still making films in this vein even now, looking at themes of jealousy and revenge. I would highly recommend The Sealed Room, it’s well worth a watch, even just to see the advancement of filmmaking from our first entry.

This entry was posted in Movies and TV and tagged 2017, Halloween, horror, movie review, movies. Bookmark the permalink.

One Response to Fear and Film: A Horror Retrospective- 1900’s