What Were They Thinking?: How not to do Anti-Racism

Bit of a short WWTT today, I'm a bit tight on time. But anyway, racial tension is a big thing at the moment and has been basically since Europeans started to colonise Africa. Many comics have dealt with the subject in many different ways, some good, some bad. But then you have this response from Kitty Pryde in the 80's: 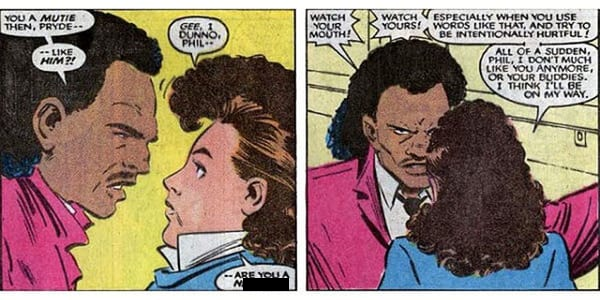 FYI, I had to censor out this page myself. Marvel actually decided it was alright to use the N word in a comic. Hard R and all. Hand-claps for Marvel guys. Now, they make a decent enough point by saying that even if you don't intend to be racist you still can be, and that you shouldn't hold yourself to a double standard, getting offended by racism when you are acting racist yourself, but look at what they're actually saying here. You've got a made up insult against a made up section of society (in this case "mutie" for mutants) put on the same level as a word that has very rightfully been completely removed from polite conversation because of how racist it is. X-Men is a great platform to fight against prejudice (which is why I think it's so strange that the movies are made by the same company that makes Fox News), but come on guys, really? You chose to equate actual racism with prejudice that only exists in your fictional world. And you used a Jewish character to do it as well, that's the amazing thing. You could have made the point actually mean something, because both racism and anti-Semitism were and still are disturbingly prevelant. Those are two things that are equatable. But racism against anti-mutantism? And, let's not forget, you actually published a full on racial slur in a comic. It doesn't really even matter what the context is for the story, that's the sort of stupid thing that shouldn't even get past the planning stage without a firing taking place.

3 Responses to What Were They Thinking?: How not to do Anti-Racism