What Were They Thinking?: DC Does Dallas

In last weeks What Were They Thinking (the place where we take a look at all of the stupidest, most ill advised things in comic book history) we talked about Superman. And this week, we're going to be talking about... Superman, because why not. The Man Of Steel has been around longer than most and he has so many dirty secrets under that cape that we've barely scratched the surface. But with that in mind, this week we're going to be taking a look at the time he made a "specialist film for gentlemen" with the wife of fellow Justice League do-gooder type Mr Miracle, Big Barda. 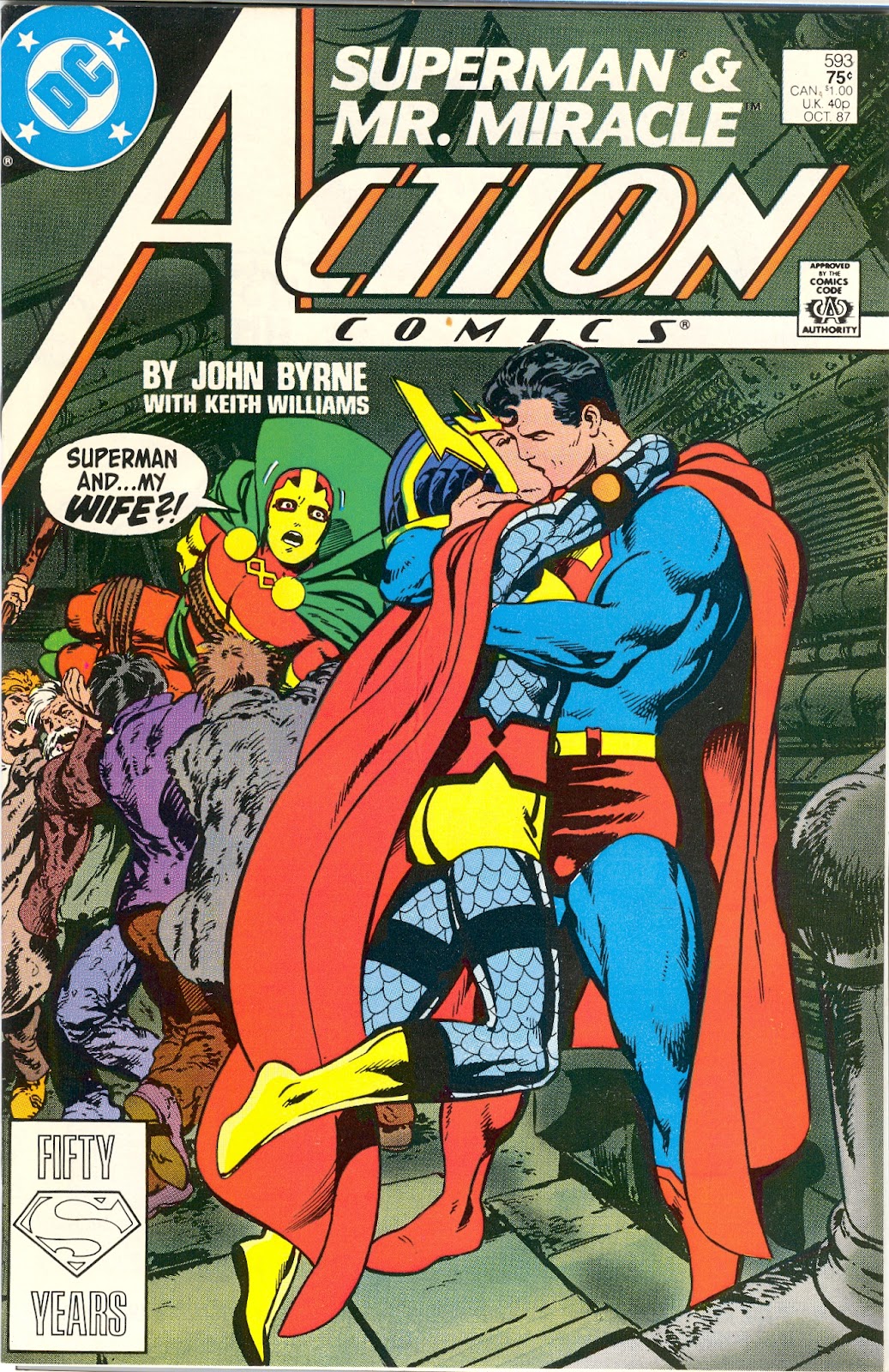 So yeah, back in 1987, as part of their 50 years of Superman celebrations, DC (in their unquestionable and infinite wisdom) thought "well, we've done almost everything with Superman. He's been in comics, movies and TV shows. We've introduced fantastic enemies for him, given him family members and had him go to the future and the past. He's led the Justice League, his romance with Lois Lane is the most famous in comic book history and his comics have been in publication non-stop for 50 years now. What is there left to do with him? Ah yes, pornography." I'd love to be in the board room when this idea was put up for discussion.

"Ok, now on to our next point, the upcoming issue of Action Comics. Bill what have we got?"

"Oh, well, that's ok then. For a moment there I thought they planned to use Lois or Lana. That's fine, tell them to get going with the art work then. Now, one of the creative team had this great idea for a new comic. What they want to do is take the Justice League, remove all of the people the fans care about, like Superman, Batman and the Flash, so there's just Martian Manhunter and Aquaman left, replace all of the established heroes with characters no-one has heard of or no-one really cares about, then move the team to Detroit. Personally, I think it's the best idea ever. What do you guys think?"

So the concept behind this issue of Action Comics (DC's flagship title) was that the aptly named Sleez, aka this guy-

made an erotic film with Big Barda whilst she was under his mind controlling powers. Not content with this, Sleez then takes control of Supermans mind and has him and Big Barda star in a pornographic feature. Fortunately, before Superman can show the universe just how super his man actually is, a rather irate Mister Miracle spoils Sleez's fun and breaks Supes and his wife out of their mind controlled states. Sleez then blows himself up and there's a very, very, very awkward couple of panels where everyone involved agree never to talk or think about this episode ever again, probably acting as a proxy for the readers. Plus this whole thing outs Darkseid as a closet sex pest because he's the one who shows Mister Miracle the original Barda/ Sleez sextape after "his agents intercepted the tape at a store that specializes in that fare". Uh-huh. Ok Mr 'Seid, what are your agents doing in "stores that specialize in that fare" exactly? And why are they bringing said fare back to you. I guess that what with having so many kids he ain't getting enough at home and has had to resort to other measures. You know, some people watch illicit tapes, other search for a way to end all life, each to their own.

Oh and also, Sleez gets maximum stupid villain points for his reasoning behind making these films of a specialized nature for the enjoyment of gentlemen. Apparently he was making them so he could raise enough money to raise an army against Darkseid. Firstly, the specialist film business must be doing gangbusters if you can make enough off of it to raise an army. Secondly, be careful if you ever take your family to the cinema whilst holidaying on Apokolips. Thirdly, the irony that Darkseid himself is funding this, what with his agents "intercepting" these films from the stores that sell them. And fourthly and finally, SLEEZ YOU DUMBASS, YOU HAVE MIND CONTROL POWERS! Why are you mind controlling people into getting jiggy on the horizontal when you could just as easily mind control them into arming themselves and fighting against Darkseid? I'm pretty damn sure that isn't the reason and he just wanted Big Barda in the bedroom. Good thing Mister Miracle stopped the whole thing because the guy does look like someone with some very creepy fetishes.

And I would also like to point out the fact that, not only did this story get written, get approved by the editorial team and get published, this story was also approved by the Comics Code Authority (as per the little mark on the cover that says "Approved By The Comics Code Authority). You know, that governing body that was put in place in the 50's to stamp out any and all violence, horror, nudity and other nasty things in comics lest they warp the minds of poor innocent children. I know the Authority had relaxed a bit by the 80's but really. They let this get through when they banned the word Flick from being used for 20 years in case the L and the I ran together to say ****. I despair of this industry sometimes.

2 Responses to What Were They Thinking?: DC Does Dallas