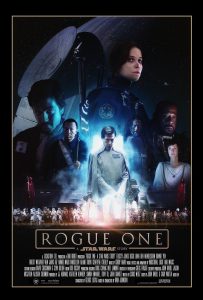 Hey everybody! As promised, here is my review for Rogue One: A Star Wars Story. After several conversations post-movie, on the drive home, at home, etc., I feel like I’ve had time to bring my thoughts together to into a review for all of you. I’m going to be keeping this absolutely spoiler-free as well, so read on without fear! I mean, if you want to go into this film completely blind, then maybe skip this for now (I understand, I try not to watch reviews for movies I want to see in theaters, especially if I’m going to review them). For those of you carrying on, let’s get right to it.

First off, let’s talk a bit about the story. Without going into any detail, I’m sure hearing the words Star Wars and prequel story together made more than a few people nervous. I’m happy to say that there is no need for concern. This is not a prequel like the prequels. The things I didn’t like about those films I didn’t find here. This had the feel of Star Wars more than those films while at the same time being its own animal. The tone in this film is very different from the main ‘Skywalker Saga’. When we came out of the theater I turned to the other half and said, “The trailers made me say ‘wow, this looks like a war movie, I didn’t think they’d take me up on that!’”. And it’s true, there’s a much more grounded, serious tone to this one. While there is some humor interspersed in-between, this is not the light, straightforward, good-vs.-evil of Luke vs. Vader. There’s politics on both sides, there’s the good and bad of human nature in both sides, this feels like Star Wars but it feels like a reality we haven’t seen yet. In the Skywalker films where the Empire exists, it is ever-present but always distant (Tatooine) or sanitized (Cloud City). You never really see what it’s like to live under Empire occupation. In this, you get a better sense of that than any of the other movies. This isn’t like a ‘gritty reboot’, this is just stripping away the black-and-white idealism of the others and showing how reality is a lot more grey. 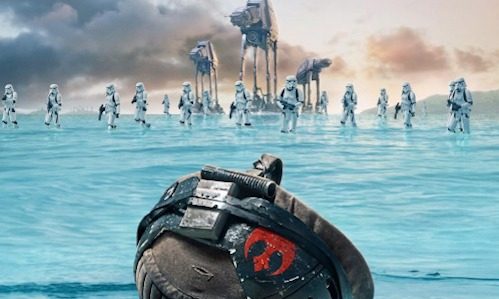 I really love this poster. It fits quite well.

And for those who were nervous about this film because Gareth Edwards was directing, I’m happy to say you’re fine here as well. I know a lot of people didn’t care for his take on Godzilla for various reasons, but one of the main problems that I heard was the lack of connection or interest in the human characters. That, and of course, not enough Godzilla, but that doesn’t really apply here. In Rogue One, there are quite a few characters, and the main ones are all new to the series (as far as I know, I haven’t started on the new Expanded Universe yet), but I felt a lot of connection to them. Even Jyn Erso, who I wasn’t super excited for based on trailers alone. They belonged in this world, and they felt authentic, not like caricatures. I connected with and went along with these characters on their journey far more than I did the ones from Godzilla, which I did like, for the record. There was also a concern because reshoots were done, and there were changes made to the story as production went along. I personally didn’t notice any issues with that, and whatever was a reshoot wasn’t noticeable to me. Suicide Squad might be the most egregious example of reshoots changing a movie completely, but I did not get that sense here at all. This did not feel like two movies mashed into one, this was a coherent story that happened to have been tweaked a bit. While it would be interesting to see what was changed and left out, it would only be out of curiosity, not because the movie felt incomplete. And unlike the prequels, any cameos that appeared in the movie felt natural and like they should be there. Given the timeline, it would only make sense for certain characters to show up and they were done in a way that wasn’t ham-fisted.

Finally, let’s talk about how this movie looked and sounded. I expected it would look good, and it certainly did. Gareth Edwards has a great eye for shots that show scale, especially massive scale. For a Star Wars film, and especially one where we’ve got the Death Star as such a central plot point, you really need it. He’s very good at keeping the action on the ground, where you see what’s happening from the perspective of the characters that are there. But the aerial and space combat are just as well done, as big as they should be for a movie like this, but the shots aren’t so close and crowded that you can’t see what’s going on. I don’t want to go into any specifics, but it looks amazing. I don’t just mean in the big things either. The small details really got me, too. While there is (obviously) lots of CG, there’s a very practical, organic-ness to the film and the world as well. It’s real; it has a grimy, well-used, lived-in feel that I found the other prequels really lacked. The costuming was also superb, it was all accurate and harkening back to the original trilogy. There are elements of the Rebel outfits reminiscent of several points in those first three movies, from the pilots to the ground troops. The same for the Empire, where we have gone back to the classic Stormtrooper look, as well as the familiar grey and black of officers, pilots, and staff. But it is in the Imperial side that we have some new iconic looks as well. From Krennic’s white uniform and cape to the head-to-toe black Death Troopers, we see more of the diverse nature of the Empire’s troops. 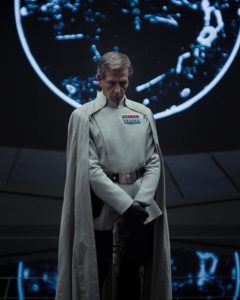 Rather stylish, isn't he?

Also harkening back to the original films was the score, composed by Michael Giacchino, who also worked on films like Jurassic World. So he isn’t a stranger to filling John Williams' shoes, and it shows. There’s enough notes and moments reminiscent of the original music to make it familiar but at the same time it’s just different enough to be its own. It’s a firmly Star Wars score, and it’s beautiful. But you can tell there’s something different and that this movie stands on its own, there’s no huge swell of the iconic theme at the beginning (just like there’s no text crawl), but the music fits the movie perfectly.

So, in conclusion, what can I say I haven’t said already? This was a very different Star Wars movie, and I don’t say that as a bad thing. If they want to make offshoot films in the universe, it’s such a relief to see they aren’t afraid to make them stand alone, to not have to follow the Star Wars formula slavishly. If this is how this Expanded Universe is going to be, bring on more!

2 Responses to Rogue One: A Star Wars Story Non-Spoiler Review