Who doesn't love Deadpool? I mean, aside from Wolverine, Thor, the X-Men and basically anyone who's ever met him? This is a pretty cool dude we're dealing with here. And no, I'm not just saying that because he's got a gun to my head. (Help me. He's got a gun to my head!) The baddest Merc With a Mouth just got a restart to his own series. Basically, he's about to be more popular than ever and there's not much we can do about it. From the looks of the cover, there may not even be much monsterzilla can do about it. (We can't say the "G" word for legal reasons...probably). Is it just me, or does this version look more like Reptar from Rugrats?

The writing by comedians Brian Posehn and Gerry Duggan is hilarious and very fitting for Mr. Wilson aka Deadpool. The pacing is good and we'll surely see a few familiar faces from the (American) history books in this series, starting with this issue. It's a good start to a really cool and funny story arc that could last a while. Then there's the team-ups which according to those he's teaming with aren't team-ups at all. The dialogue is fantastic and i know I throw that word around, but it's really just witty, stupid, childish fun. At the end of the day, that's what Deadpool is. He's a kid with a bunch of weapons a smart mouth and a bad case of road rash. 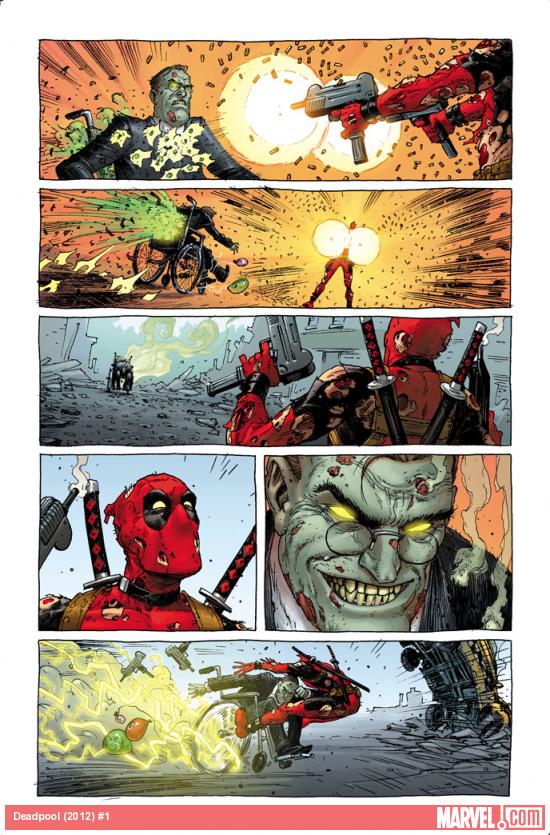 Here's some off the awesome (cartoony) artwork from Tony Moore. Yes, I said "artwork", as in pencils and inks. Pretty cool, if you ask me, which I guess you did since you're reading this. Anywho, the colors from Val Staples (who is apparently a dude, sort of like Val Kilmer was in Top Gun) are just epic. They make everything pop, even Mr. Polio, or is that Former presider Polio? (He died in the 40s. It's not too soon.) Also, sorry for lack of word balloons on the page. It was all I could find at short notice. The art works for a Deadpool story, I think. As does the ghostly FDR in the photo. That's President Franklin Delano Roosevelt to our non-US friends. It's an uncultured thing, you wouldn't want to understand.

This gets an "A" grade from me. I love the humor and teen the cartoony artwork. Given what we see in these pages, I think we'll be in for a treat in the months to come. That's if our comedy writers keep the same pace and quality of laughs. Please, go out and buy this before Wade runs you through with a katana, or Bea Arthur as he calls her.

6 Responses to Attack of the Dead Presidents