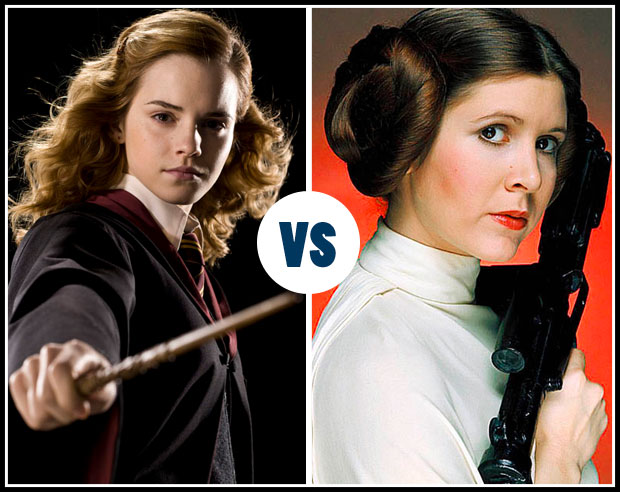 Let me clear what this versus is NOT -- it is not "Who would you want as a girlfriend" or "Who is hotter" comparison. This is no different than a regular Versus matching Superman against Batman or whatnot. Any "Rawr, catfight!" comments will be deleted without warning.

So the scenario here is, who would win in a straight-up fight between these two awesome heroines?

At one level, this is a classic battle between science and magic. Would Leia's blaster and Empire-level tech trump Hermione's extremely flexible wand and encyclopedic arcane knowledge?

On another level, any fight is about the individuals involved. Both of these women are battle-hardened veterans, used to close combat and the violence of a fight. Leia's led troops, brought down Imperial Stormtroopers, raced through dense forest on highly questionable speeders, and resisted interrogation by one of the most powerful forces in the galaxy. This is one tough cookie.

But Hermione has also resisted assault from the most powerful force in her world. She's gone toe-to-toe with Death Eaters and worse, and held up better than some of the supposedly dedicated warriors around her. And all while she was just a kid! She's also whip-smart, much more so than Leia.

So who do you think would come out the victor in a contest between these two?