Posted on September 14, 2012 by mcknight57 | Comments Off on Bruce Wayne and the Red Hood Gang 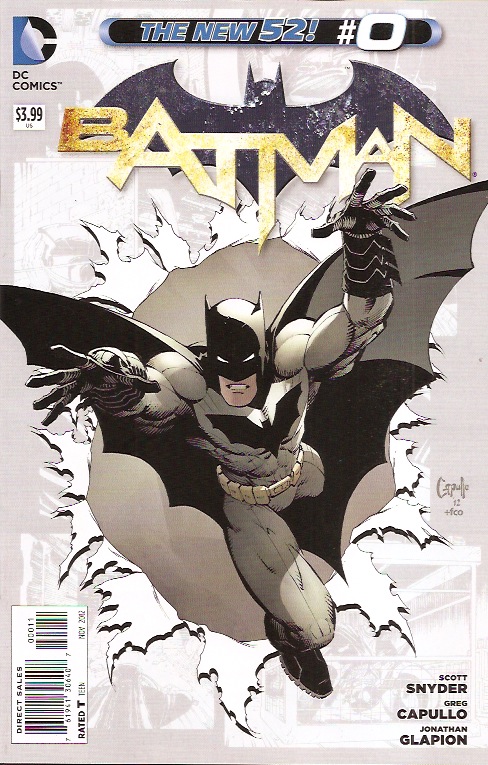 So clearly, this is no longer a rule. The 0 issue is pretty good, considering after last week's Detective Comics, there wasn't much left to cover. In this one, we see the original Red Hood before Jason Todd took over the mantle. We see Alfred, of course, Jim Gordon and even a Dark Knight-ish Bat Cave. The only thing is, we never see Wayne Manor, which Gordon makes mention of. It feels very much like the first half of Year One.

Scott Snyder has done a great job for the last year on this title, giving us great stories in Court of Owls, Night of the Owls and now the origin issue. From start to finish it's very much a Batman book. He may be relatively green, but still Batman. Bruce even mentions something that fans have long known, Bruce Wayne is the real facade. I can't wait for the next few months of this title. My only problem is the cliffhanger ending, which left me on the edge of my seat.

Greg Capullo is an amazing artist, simply in the way that he is consistent. There are no bad angles in here. Every motion is captured as if it were stills from the latest, greatest action movie. We never see the Batsuit, but moves are unmistakably Batman. Jonathan Galpion's inks and Fco Plascencia's colors work as the perfect complement to Capullo's pencils. Theses issues are beginning to rival the art of Bruce Timm from Batman: The Animated Series in just how iconic they are. They fit the character wonderfully.

The ending was the only thing keeping this from being top of the class for this week. The creative team gets an "A-."