Our Versus this week features two prominent back-up characters from two of the starriest of science fiction franchises: 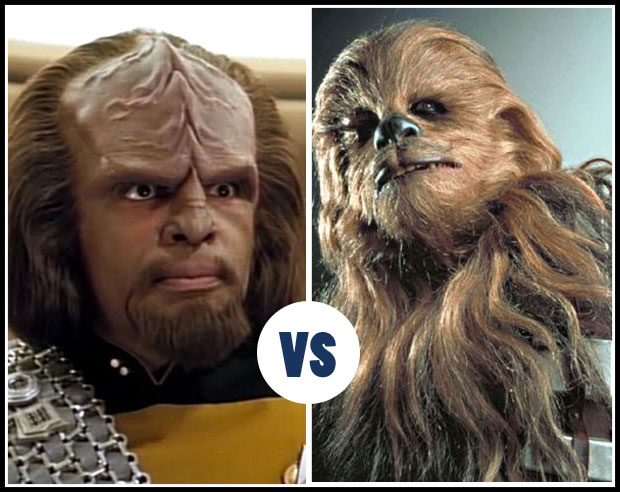 On one hand, this is about the race of Klingons vs. the race of Wookies. Both cultures revere strong warriors, but Klingons have (I think) been more overtly warlike. Wookies are stronger and bigger, but Klingons aren't exactly slouches.

On the other hand, this is about this specific Klingon and this specific Wookie. And let's be honest, Worf hasn't exactly covered himself in glory when push comes to shove. We haven't seen Chewbacca do much in combat (at least in the movies) besides fire his crossbow and yell a lot, so it's hard to say what his real track record is. Still, I tend to side with whoever is fighting Worf, since his main role appears to be "He Who Gets Crushed By The Villain Du Jour". At least Chewie's resume is relatively clear of getting his hat handed to him.

You also have to factor in the relative tech levels of their universes. I'd say on the level of the individual, the two seem roughly equivalent. So that's sort of a wash.

I'm going to go with Chewie on this one, but I'm curious as to who you'd pick and why. Sound off in the comments!

40 Responses to Worf vs. Chewbacca