The seas are a-boil and the waves are a-crashing as we witness a titanic confrontation between the kings of their world's seas! 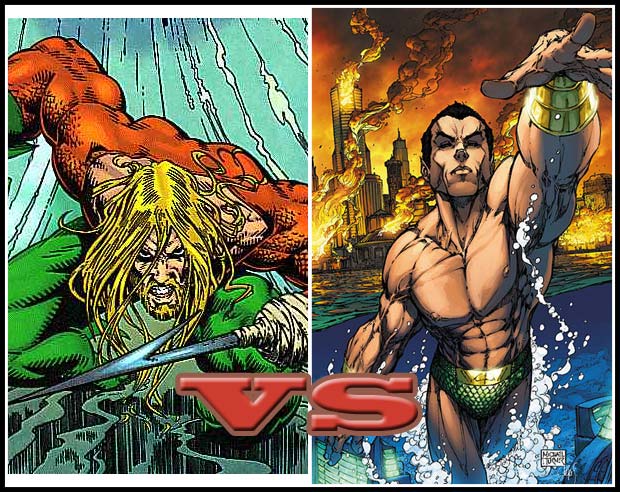 Depending on what version of Aquaman you go with, he's either got a ginormous metal hook instead of a hand, or a hard water hand, or just, you know, a regular hand. While originally unable to live outside of water for more than an hour, in later years he's fully capable on land. He's the king of Atlantis (again, depending) and isn't afraid to go out in public wearing scaly orange tops and footie PJs.

Namor has a wicked cool widow's peak thing going on, complementing big elf ears. No matter which version you go with, he has itty bitty wings on his feet, which, let's be honest, make no sense at all in any way. How many fish have you seen with feathery wings?! The answer is "none", unless you count that one time I accidentally hooked a sea gull while casting and temporarily used it as bait. On the fashion front, Namor's so buff he isn't afraid to go out in public wearing nothing but a European style banana hammock. A scaly European style banana hammock, which I don't think even Europeans are brave enough to do. I like to envision a future where he and Sue Richards finally get married and Namor lets himself go, whereupon their kids stay permanently invisible to avoid the embarrassment of being seen on the beach with "Dad" and his gigantic paunch heaving over the sides of that mankini.

Both are super tough, both are super strong, and both are used to being literally kings of all they survey. Aquaman can talk to aquatic life, but Namor can fly.

I'd probably put my money on Namor just because, come on, Aquaman, but I hope you'll be able to provide a good argument for your own choice. So have at it!

35 Responses to Aquaman Vs. Namor