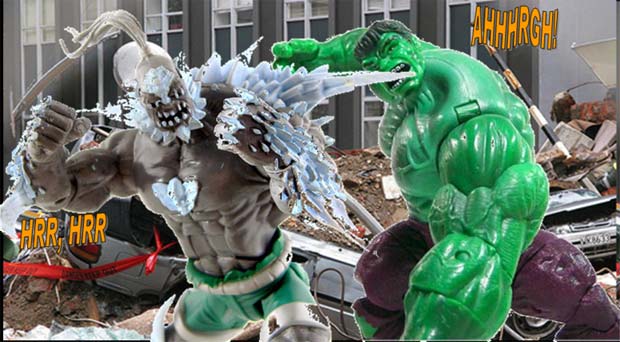 While thinking about John Byrne's "Death of Superman" classic (what, doesn't everyone spend their days thinking about decades-old superhero battles?!), I started wondering about the following Epic Question:

The potential for collateral damage hampered Superman's efforts to fight Doomsday originally. When you care whether or not entire city blocks full of innocent bystanders die, that influences your tactics. Whereas the Hulk ... well, let's be kind and say that the "innocent bystander" factor isn't exactly at the top of his list.

Plus, the madder the Hulk gets, the more powerful he grows. And he'd be pretty mad after a while of Doomsday whaling on his green butt. Since the fully enraged, yet still coldly capable, Hulk was able to annihilate virtually the entire Marvel Universe in World War Hulk, you'd have to think he could, at a minimum, give the Spiked Wonder a run for his money.

On the other hand, Doomsday was designed to be the ultimate weapon, while the Hulk is largely an accident. Can purposeful design beat fortuitous circumstance?

At the end of the day, I'd have to go with the Hulk winning this one, especially if it's the World War Hulk era character.

What about you, what do you think would happen?