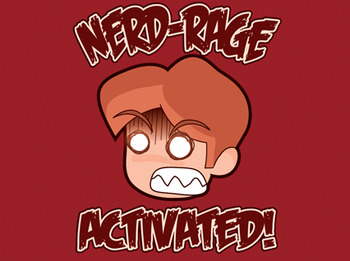 I need a break from Open Critique Days (they'll return next week), but in the meantime I thought it would be fun to have another Sharing Day! We've talked before about geek moments that got you sad or weepy, but today I wanted to talk about nerd-dom's dark underbelly: rage.

What's the angriest you've gotten over a piece of geekery, whether it be an RPG session, computer game, movie, novel, or what have you?

I think I've mentioned this before, but to this day I still get angry over "Superman III". It was such a desecration of an institution I love that I could feel my face getting flush, my hands clenching into fists, and an uncontrollable urge to find the producers and punch them in the face. Non-geeky friends sometimes ask me why I'm not planning on seeing a given super-hero movie, and "Superman III" is why. When you love something so much, seeing it done poorly is much more painful than just sitting through a random bad movie.

I'm getting pissed just thinking about it, almost thirty years later! What an awful, putrid, offensive train-wreck of a movie. I think the entire Superman movie franchise still hasn't overcome the unholy stench of that film splashed all over the character. Bastards.

Now it’s your turn -- let the stories of anger spill forth!

(Image at the top available as a T-shirt from TeeNormous.com.)