After being chased by a giant prehistoric cave bear and being rescued by a ridiculously strong proto-human during our impromptu wall climbing expedition, we voted overwhelmingly to keep following our new friend Iaark into his cave to further our questy adventure:

You follow Iaark into the tunnel, hoping it will come out in the open. "Where does this lead?" you ask, though you know he can't understand your language.

Great, we're the kind of guy who, when the cab driver doesn't understand us, just says the same thing only louder. Because English is comprehensible to a non-speaker in direct proportion to its volume. I bet we're a lousy tipper, too.

You have no idea what that means, but the tone of it was friendly. Maybe he's just exploring the tunnel to see where it goes.

Iaark continues on. You follow close behind, thinking that you may come out on the other side of the mountain. Instead, the tunnel floor gives way. You're falling, and Iaark is falling with you, tumbling through the Cave of Time! Then you are waking, as if from a dream. Once again you're just inside the entrance of a cave. You walk out into the open air. Something -- maybe it's the smell of grass and flowers, or the temperature, or the sound of traffic from a nearby highway -- tells you that you're back in your own time!

"Ak lugga!" says a voice. It's Iaark, walking toward you from the interior of the cave.

The two of you reach a road and walk along into a nearby town. Iaark gasps at the sight of cars and trucks going by on the highway. Your time is stranger to him than his time was to you! When you reach the town and talk to a police officer standing on a street corner, you find out that you are indeed back in your own time. 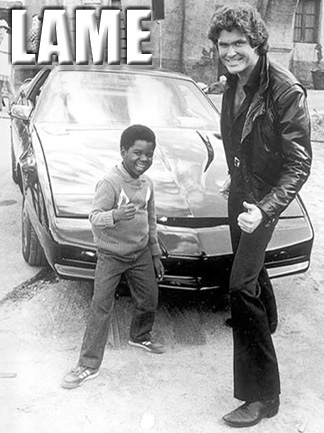 Sorry, no, two words: Effing lame. Are you serious about this, Edward Packard?! When you choose to go into the past and start exploring, your goal is not to end up right back where you started after the thrill of climbing a wall. And nothing says "fun!" in a novel like introducing an intriguing character, only to completely end the story two pages later without learning a single GD thing about him. Well played, sir.

I am so done with this stupid adventure. My apologies for subjecting you all to this frustrating dive into irrelevancy. We'll try something different next week.

If you had a favorite Choose Your Own Adventure type of book you'd like to see us try next, by all means let me know. Just so long as it's not as idiotic as this one.

15 Responses to A Cavernous Conclusion