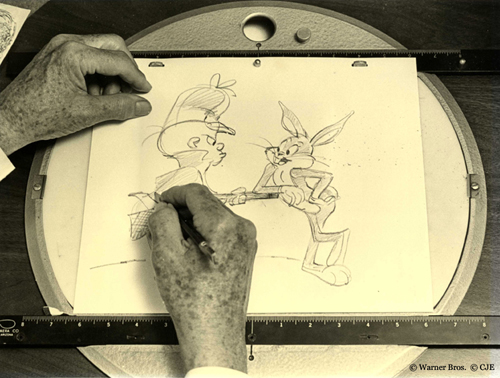 I need a break from Open Critique Days, though they'll return next week, but in the meantime I thought it would be fun to have another Sharing Day!

What is your favorite cartoon from your childhood?

When I was a kid, not only did we have to walk to school uphill in the snow both ways (quite the feat considering I lived in Louisiana), but we also only had three channels from which to choose, and cartoons were only on Saturday mornings. It's a miracle any of us survived to adulthood. So you didn't have a lot of options, but fortunately we did have Bugs Bunny and the rest of the Loony Tunes gang.

Even as a kid, though, I could tell that there were good Bugs Bunny cartoons and lame Bugs Bunny cartoons. Only later did I realize that one guy was largely responsible for the good ones -- Chuck Jones. His timing, direction, and art were all so striking that even an ignorant eight year old could tell how superior they were to the Bugs-by-committee that took over the franchise before I was born. All the best ones were Jones joints, from "Duck! Rabbit! Duck!" to "The Rabbit of Seville" and "Bully for Bugs" and so many more. It got to the point where I'd drag my Underoos-clad butt out of bed at the crack of dawn to catch Loony Tunes, and if it wasn't a Chuck Jones one, I'd just turn around and crawl back under the covers.

Don't get me wrong, I loved my "Herculoids" and "Space Ghost" and "Transformers" cartoons, but for me, Chuck Jones' Bugs Bunny will always be the best cartoon of my childhood.

Now it’s your turn! What was your favorite childhood cartoon? And if you have a question for me, just know that I will most definitely not be posting pictures of myself in Underoos.